Should the Jefferson Memorial Be Torn Down? 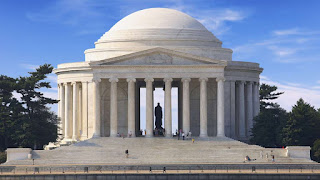 In today's New York Times, there is an article by Lucian Truscott IV, a descendant of Thomas Jefferson, who argues that the Jefferson Memorial in Washington should be taken down and replaced with a memorial for Harriet Tubman.  Although Jefferson deserves to be honored for declaring that "all men are created equal" and endowed with the rights to life, liberty, and the pursuit of happiness, he should be condemned for not doing more to abolish slavery and for his shameful taking of Sally Hemings, his slave, as his concubine, who bore him six children.  The best monument to Jefferson, Truscott says, is Monticello, which includes an exhibit of Sally Hemings's bedroom, so that visitors can be reminded of Jefferson's hypocrisy and deceitfulness.

I have written about the evidence for Jefferson having made Hemings his concubine.  I have also written about Jefferson's biological science of equality, race, and slavery.

I conclude from this that Jefferson really did make the best scientific argument for human equality and the injustice of slavery, but that he lacked the good moral character to resist the degrading effects of owning slaves.

In his original draft of the Declaration of Independence, Jefferson recognized that slavery was ultimately a "cruel war against human nature itself."  And in the Notes on the State of Virginia, he warned that "the whole commerce between master and slave is a perpetual exercise of the most boisterous passions, the most unremitting despotism on the one part, and degrading submissions on the other," and he saw that "the man must be a prodigy who can retain his manners and morals undepraved by such circumstances" (Jefferson 1982, Query XVIII, p. 162).  Clearly, Jefferson was not such a prodigy.

Instead of taking down the Jefferson Memorial, wouldn't it provide great moral instruction to add a display at the Memorial explaining Jefferson's moral flaws as manifesting the degradation that Jefferson himself saw in the institution of slavery?  After all, Truscott agrees that Monticello is a properly instructive memorial to Jefferson precisely because of the Hemings display.

If we are going to remove all of the public monuments for people who have any moral defects, then we will have no monuments at all.
Posted by Larry Arnhart at Monday, July 06, 2020