On January 22, speaking about the threat of the coronavirus, President Trump said: "We have it totally under control."  Two days later: "It will all work out well."  On February 28, speaking about it at a campaign rally: "It's going to disappear.  One day, it's like a miracle, it will disappear."

An article in the Washington Post chronicles the 19 times that Trump has downplayed the danger of the coronavirus pandemic.  Now Trump's foolishness is evident.

Even if you think he was right to suggest that the coronavirus pandemic is unlikely to be much more deadly than the yearly flu epidemic, then you would have to say he is foolish in changing his mind without giving any good reasons.

Here's a good global map of the pandemic.  The Lancet has a website with the latest published research.

Tomas Pueyo has written a helpful analysis of the data showing that the coronavirus is spreading exponentially in the U.S. and elsewhere.  Some of Pueyo's data charts are reproduced in an article in the London Daily Mail.  Most important for his paper is "Chart 7: Timeline of Events in Hubei," which shows how the growth of coronavirus cases began to increase exponentially--doubling everyday--until the Chinese imposed a total lockdown, after which new cases began to decline.  He shows that many Asian countries--Japan, Taiwan, Singapore, Thailand, and Hong Kong--have flattened the growth rate to avoid the exponential explosion because they acted quickly based on the lessons they learned from past epidemics.

But it's now too late for the U.S. and countries in Europe to avoid that explosive growth, and all of these countries will face the catastrophe that the Italians are facing today.  Within a few weeks, much of the world will probably be forced into a lockdown.

Peter Wehner has written an article for The Atlantic arguing that this delay in the American response to the coronavirus danger means the end of Trump's presidency, because the failure of the Trump administration to handle this crisis exposes the moral, intellectual, and temperamental unfitness of Trump for public office.

Evolutionary science explains coronavirus and other parasites as organisms that have evolved adaptations for exploiting their hosts in ways that facilitate their reproduction.  So, for example, that's why coughing and sneezing are common symptoms for viral illnesses: if a virus causes its host to cough and sneeze when its host is close to other potential hosts, this increases the likelihood that the virus will replicate itself.  So viruses and other parasites are designed by evolution to alter the behavior of the host for the benefit of the parasite, which is often costly for the host--even to the point of death.

But a really smart virus will not be too deadly, because if its too deadly, it kills the host before the host can transmit the virus to another host.  The Ebola virus is so deadly--90% fatality rate--that it kills so many of the hosts so quickly that the virus does not replicate itself as widely as the coronavirus--with a fatality rate of only 0.5% to 4%.

Here's the point where we should remain rightly skeptical about the coronavirus panic.  So far, there is no clear evidence that the fatality rate for the coronavirus is much higher than for the yearly strains of flu.  Higher fatality rates based on reported cases are surely wrong, because many of the people infected by the virus do not realize they have it, and so they are not being counted.  It is clear that almost all of the deaths are among older people with preexisting health issues that make them vulnerable.  If the true death rate for coronavirus is similar to that of a severe seasonal flue, then it will be below 1%.

There is some evidence that when people contract the flu virus, but before their symptoms appear, the contagious people are more inclined to social activity--visiting people and going to social events--so that they are more likely to transmit the virus to others.  It's possible that the coronavirus does this.

Once we have this evolutionary understanding of how viruses are adapted for parasitic exploitation of hosts, we can devise strategies for countering their threats.  So, for example, we can tell people to wash their hands multiple times a day and to practice "social distancing"--staying at least six feet away from others--so that the transmission of the virus is less likely.  We can also develop elaborate public health measures for tracking and slowing the spread of the virus around a community or even around the world.  And with the microbiological understanding of how viruses work, we can devise vaccines against them.

The main philosophical lesson from this is that the universe does not care for us the way we care for ourselves, and so we must use our scientific and political knowledge of and power over the natural world to create an ecological niche for ourselves that is hospitable to human life and well-being.

To succeed in that, we must not elect to high public office people like Trump who lack the fitness for serving that human project for protecting human life in a universe that is indifferent or even hostile to our human concerns.

The blame here is not restricted to Trump and the executive branch.  Early Saturday morning, the House of Representatives passed a coronavirus relief bill, even though the congressional representatives saw the final revised bill of 110 pages only 30 minutes before they voted on it!  Justin Amash--my congressman for the 3rd Congressional District of Michigan--refuses to vote for any bill that he has not had the time to read.  So he voted "present."  He rightly argues that this illustrates how the Constitution has been thrown out by both parties.  The Congress no longer deliberates about legislation, because legislation is written by the congressional leadership (Pelosi and McConnell) with the approval of Trump.  The other members of the Congress hardly even know what's in the legislation.  This is Rule by the Swamp as opposed by constitutional government.  Amazingly, many of the intellectual supporters of Trump claim to be defenders of the Constitution.

I have written Amash as perhaps unique in his constitutionalism here and here.

I must conclude this post on a note of uncertainty because, as I have already indicated, deciding whether it is reasonable to put our societies into lockdown to reduce the coronavirus infections depends on our estimate of the fatality rate.  The crucial point in Pueyo's paper is where he concludes that while "countries that are prepared will see a fatality rate of 0.5% (South Korea) to 0.9% (rest of China," "countries that are overwhelmed will have a fatality rate between 3% and 5%."  What he means by "overwhelmed" is that countries that do not quickly go into lockdown will allow the number of infected people to rise so greatly that the number of people needing intensive hospital care will so overwhelm the hospital system that many will die because they will not receive the care necessary to save their lives.  There are reports that this has happened in Italy.  The unanswered question is whether this is true or not.  That's the question behind this graph: 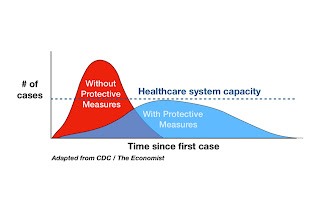