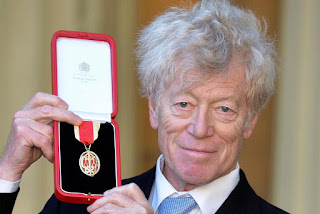 Roger Scruton died on Sunday at his home in England at the age of 75.  This picture was taken in 2016 when he was knighted by Queen Elizabeth II.  The Washington Post has a good obituary.

Scruton was the preeminent conservative philosopher of his time.  During Margaret Thatcher's years as Prime Minister, he was often identified as her "court philosopher."  But he denied that he had much influence over her because her conservatism was more of the Hayekian free-market variety that was very different from his Kirkian traditionalist conservatism.

As is often true of the traditionalist conservative thinkers today, his thought was shaped by the Kantian Romantic tradition of the Nineteenth Century that saw a religious attitude as essential for a healthy moral order, so that traditional religious experience needed to be defended against a Darwinian science that claims to explain the place of human beings in the natural world without any reference to a transcendent realm beyond nature.  And yet--again like many traditionalist conservatives--Scruton did not believe in the literal truth of Christianity or any other religion.  He wanted to have a sense of the sacred that comes from religious emotions as expressed in great art, but without the need to believe any religious doctrines.  We know that God is dead, he suggested, but we also know that human beings need to satisfy their religious longings for transcendence and redemption.  In that way, he followed the lead of Friedrich Nietzsche in his early and late writings (as opposed to the Darwinian liberalism of his middle writings).

In various posts (here, here, and here), I have criticized the atheistic religiosity of Scruton's conservatism as incoherent self-deception.
Posted by Larry Arnhart at Wednesday, January 15, 2020

I had never heard much about Scruton until he gave up the ghost. But I did notice that some of the folks at The American Conservative have eulogized him.

Happy New year, professor. I see your name come up from time to time recently as I read old blog posts from people like Peter Lawler and Pat Deneen.

I think that Rod Dreher is a fan of Scruton. But the way you describe Scruton it sounds like he believed in morally therapeutic deism. And MTD is one of Dreher's bugbears. I'm probably misreading someone.