Testosterone and Intersexuality in Female Athletics: Caster Semenya and the Desire for Sexual Identity 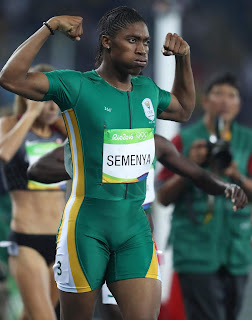 
Here is a full video of the race.

In 2016, at the Summer Olympics in Rio de Janeiro, 8 women ran in the 800 meters women's final.  Of those 8, 3 of them were chromosomal (XY) males with disorders of sex development (DSD) who identify themselves as women.  Those 3 intersex women have levels of testosterone far higher than normal for women.  These 3 were the winners of the race: Caster Semenya (Gold), Francine Niyonsaba (Silver), and Margaret Nyaira Wambui (Bronze).  One of the women who lost that race--Lynsey Sharp--expressed her frustration with having to compete against intersex individuals with the unfair advantages that come from male testosterone levels.

Cases like this have created a controversy over whether it is fair for intersex individuals to compete in women's athletic events because they identify themselves as women.  Should we replace biological sex differences with gender identity, so that anyone who identifies as a woman is a woman, even when she has a male body in some respects?  Or should we say that segregating biological males and biological females really does matter, particularly in certain arenas of life like athletic competition, where males have a performance advantage over females?

Both men and women produce testosterone (T).  But men have higher levels of T as produced by the testes, with lower levels produced in the adrenal glands.  Women also produce T in their adrenal glands, and in their ovaries.  In general, men have 10 to 30 times more T than women.  Most women have T levels in the range of 0.5 to 1.5 nanomoles per liter (nmol/L), while most men have T in the range of 10 to 35 nmol/L.  This gap appears first in puberty, when the testes produce more T in men than the adrenal glands and ovaries produce in women.

Female athletes with T levels at or near the male range are either doping, or they are trans (male to female) or intersex women--that is, 46 XY males with some disorder of sex development (DSD).  Among elite female athletes, the most common DSD is 5-alpha reductase deficiency (5-ARD) (Coleman 2017; Fenichel et al. 2013).  5-ARD is caused by a genetic mutation that creates a deficiency in the enzyme 5-alpha reductase, which is necessary for the conversion of testosterone to dihydrotestosterone (DHT).  A low level of DHT in a developing XY fetus disrupts the formation of the external sex organs before birth.  At birth, children with 5-ARD have sexually ambiguous sex organs, and they are often raised as girls, although they are biologically male, with testes producing testosterone.  At puberty, their male typical testosterone levels will produce the normal development of secondary male sex characteristics.

Caster Semenya is probably an XY male born with 5-ARD, who has always identified herself as a female, although she has also the athletic performance advantages that come with her biologically male body.  Once this became clear, it was possible for some sports observers to predict that she would have a virtually 100% chance of winning the Gold Medal in the 800 meters race in Rio in 2016, because not even the best elite female athletes with female bodies could come close to overcoming her performance advantage with her male body.

In response to the complaints about the unfair advantage enjoyed by Semenya and other intersex athletes competing in women's athletic events, the International Association of Athletic Federations (IAAF) in 2018 issued new "Eligibility Regulations for the Female Classification."  The regulations applied to those individuals who were legally female and had some DSD causing them to have male chromosomes (XY), testes and not ovaries, circulating T in the male range, and bodies that can use circulating T.  These people would be permitted to compete as women in middle-distance track races (400 meters to one mile) only if they lowered the level of T in their blood down to below 5 nmol/L (the highest possible level for a healthy woman with ovaries) for a period of six months prior to competition.

Semenya filed a suit against these regulations as unfairly discriminatory.  Last May, the Court of Arbitration for Sport (CAS) ruled (by a 2-1 vote of the judges) to uphold the IAAF regulations.  Some of the coverage of this case in The New York Times can be found here and here.

The arguments in favor of the IAAS's position have been well stated by people like Dorianne Lambelet Coleman, a law professor at Duke Law School who was a champion 800 meter runner in 1982 and 1983 (Coleman 2017, 2019).  The opposing arguments have been put forward by people like Rebecca Jordan-Young and Katrina Karkazis (2019).

Coleman contends--rightly I think--that while sex segregation and discrimination should often be challenged as unfair, the separation of the sexes is justifiable when this serves some valuable institutional goals while minimizing any harmful effects.  That is true for the institution of sports because separating men and women into different competitive arenas promotes the valuable goals of sport in the modern world.  It showcases the best athletes, because in having men compete with men and women with women, the best female athletes have an equal opportunity to be recognized for their athletic achievements, which would not happen if they were competing with men, because biological sex differences--particularly in testosterone levels--give men a performance advantage over women.  This segregation of the sexes in sports promotes liberal reform by weakening the traditional subordination of women to men.  Beginning with the Olympics in ancient Greece, elite athletic competition was a purely male activity, and it was not until the beginning of the 20th century, that women were allowed to compete in women's only events.  To achieve these goals, there has to be some defined categories distinguishing men and women and some enforcement of rules for who can compete as women in the women's events.

Jordan-Young and Karkazis offer lots of objections to this position, but the most fundamental one is that Coleman's reasoning falsely assumes a sex dualism in which sex identity is clearly divided into the bipolar categories of male and female, which includes a "sex gap" in T--men have a high T level, while women have a low T level, and there is no overlap between the T blood levels of men and women.  If this were true, then one could say that a naturally high T woman like Semenya is not "really" a woman, and so she should not be allowed to compete in women's athletics, because her typically male T levels give her an unfair advantage over women with typically female T levels.

This is not true, they argue, because there is no clear sex gap in T levels between elite male and female athletes.  In one large-scale study of T in elite athletes--taking blood samples from 446 men and 234 women athletes in fifteen Olympic events in 2000--it was found that although the average T levels were very different between men and women, there was a substantial overlap in the T levels of the women and men athletes.  13.7 percent of the women had T above the typical female range, and 4.7 percent (12 individuals) had T levels within the typical male range.  The researchers concluded from this that "the IOC [International Olympic Committee] definition of a woman as one who has a 'normal' testosterone level is untenable" (Healy et al. 2014: 294).

And yet another large-scale study of T in elite athletes reached a contradictory conclusion.  Researchers measured the blood levels of T in 849 elite female athletes, and once they removed five doped athletes and five 46 XY DSD women from the group, they found that the median T values were close to the range typical for young women.  They concluded that "doping and some forms of DSD are likely to be the two most important confounding factors when hyperandrogenism in female athletes is considered" (Bermon et al. 2014).  This would explain the contradiction with the other study, because the 12 women in that study with T levels within the typical male range were probably either doping or DSD women.

Jordan-Young and Karkazis have objected that to exclude all women whose high natural T could be traced to variations in sex development--intersex people--as "confounding factors" is question-begging circular reasoning.  T levels look dimorphic only when you throw out women with intersex variations that have T levels overlapping the male range.  But if you include those women, you will see that T levels aren't dimorphic, because they are characterized by two curves for men and women that overlap.

This challenges the claim that I have often made about the natural desire for sexual identity--that human beings generally desire to identify themselves as male or female, which creates a universal bipolarity of male and female in all human societies.  Against this, Jordan-Young and Karkazis insist that there is no clear male/female dualism because the natural reality of sexual identity is too messy for that--some people are male, some are female, and some are in-between.  There are not just two sexes; but, as Anne Fausto-Sterling has argued, there are at least five.  I have written about this here, here, and here.

Jordan-Young, Karkazis, and Fausto-Sterling are correct in pointing out that sex characteristics are not always distributed bimodally into clear male and female categories.  But still, as Coleman has observed, as soon as one considers the incidence of this distribution and the reproductive function of male and female genitalia, sex clearly does appear bipolar.  Over 98% of all human beings have had a normal sex development into either a typical male or a typical female, so that for most of us, chromosomal sex, gonadal sex, hormonal sex, and phenotypic sex all support a sex identity as either male or female.  One can see this in any textbook chart of normal genital development.

And yet even as nature shows this bipolarity of male and female in normal genital development, it also shows genital variation, as in this illustration, which shows the typical male (figure 1), the typical female (figure 6), and the in-between types (figures 2-5).  As a statistical norm, sex is clearly binary, although it's binary with exceptions.  As Aristotle would say, the dualism of male and female is what nature creates "for the most part," but there will always be some exceptions to the rule.  This is generally true for all biological phenomena.

The science of sexuality confirms what we should know by common-sense experience that both the norm of sexual duality and the exceptions to that norm are real.  They are not just arbitrary social constructions.

We can respect Caster Semenya as an intersex individual with a partially male body and a female gender identity.  But we must also respect those many typically female athletes who want to compete with other females, so that they can display their athletic excellence.  This creates a conflict of interests.  The IAAF has tried to resolve this conflict by telling those intersex individuals like Semenya that they must either compete with men or reduce their testosterone levels to compete with women.  In doing this, they have weighed the possible harm to people like Semenya against the possible harm to typically female athletes.

There is another alternative.  We could say that all athletic competition should be unisex: everyone--whether male, female, or intesex--could compete in the same events.  If that were done, however, in many events, women would never win.  And surely that would be unfair for the women.  That's why women's only athletic events were originally established--to allow female athletes to display their athletic excellence, free from the unfair advantage that men would have in competing with them.  If that is correct, doesn't that mean that athletic institutions must define what counts as typically male and female individuals for the purpose of distinguishing who is rightly assigned to male or female events?
REFERENCES