I have been writing a series of posts on Paul Bingham's social coercion theory as explaining the evolutionary history of what Locke called the executive power of the law of nature. I am doing this despite the fact that Bingham has no knowledge of Locke.

If the coercive threat of violence is the only solution to the problem of conflicts of interest, and thus the only way to secure non-kin social cooperation, then every human social order should depend upon armed coercive enforcement of law, and the scale of cooperation should expand in proportion to the scale of the weaponry for coercion.  This coercive power serves the special interests of an elite ruling class whenever the access to that power is restricted to the elite rulers.  That coercive power will serve the general interests of all or most members of society only when all or most individuals have some access to the weapons of coercion.

The evolutionary state of nature--the original human condition in stateless societies--was largely egalitarian and democratic because most or all adult individuals had access to the weapons of coercion for enforcing the norms of cooperation.  That original condition of liberty and equality was largely lost with the establishment of centralized bureaucratic power in states where ruling elites controlled the weapons of coercion.  A modern liberal democratic state can restore some of that original liberty and equality, in which government is directed to securing the natural rights of equal liberty, only if all or most individuals have some access to the weapons of coercion.  In this way, we see how every human society rests on Locke's executive power of the law of nature.

Another way of putting this is to say that humans have always had only those rights they could coercively defend, and in that sense might does make right.  Or, as Spinoza said, "The right of nature extends as far as its power" (Theological Political Treatise, 16.3).  That is, I think, the fundamental insight in Bingham's social coercion theory or Locke's theory of the natural executive power to  punish.

Here is a TED talk by Bingham and Joanne Souza explaining their social coercion theory:

A crucial turn in the history of weaponry that led to the emergence of the modern world arose from the invention of gunpowder (see Jack Kelly, Gunpowder: Alchemy, Bombards, & Pyrotechnics--The History of the Explosive that Changed the World [Basic Books, 2004].)

Gunpowder comes from grinding together the right combination of saltpeter (75%), charcoal (15%), and sulfur (10%).  It was first invented by the Chinese around 1100 CE.  Ignition turns the gunpowder's stored chemical energy into the thermal energy of flame and the mechanical energy of compressed gases.  Containers of some sort are needed to direct that energy and put it to work.

Chinese fireworks craftsmen designed the four basic forms of containment that constitute all the uses of gunpowder--bombs, incendiary weapons, rockets, and guns.  A bomb is created by putting gunpowder in a container sealed up and with a fuse, so that ignition generates enough pressure to blow up the container.  An incendiary weapon is created by putting gunpowder into a tube with one open end, so that the combustion produces a fiery spray.  A rocket is created when the burning powder drives the tube forward.  A gun is created when the powder is put in a tube with one end open and some object is put in the tube on top of the powder, so that when the powder burns, the expanding gases push the projectile out at a high rate of speed.

Gunpowder technology entered Europe sometime between 1200 and 1250 CE.  Advanced artillery and guns were developed between 1350 and 1500 CE.  This new weapons technology brought the collapse of the European feudal order of archaic states based on a small elite of armored warriors and kingly chiefs in their castles.  Gunpowder weaponry could defeat armored warriors, and gunpowder artillery could blow up castle walls.

The first guns invented in Europe were bombards--a three-ton barrel fired a marble ball weighing over 500 pounds that could smash the walls of a castle. 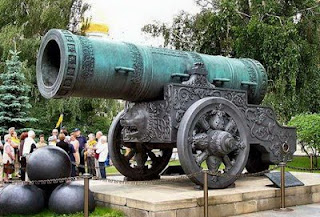 These new weapons were so expensive to build and operate that only powerful centralized states could use them to defeat the many small feudal states.  This improved coercive power supported the rise of early modern states in Europe and elsewhere.

This was the end of feudal knighthood.  Don Miguel de Cervantes was a European noble who had fought in some of the wars establishing early modern European states.  He expressed his scorn for the new gunpowder weapons through the words of his fictional knight, Don Quixote:


"Blessed were the times which lacked the dreadful fury of those diabolical engines. . . whose inventor I firmly believe is now receiving the reward for his devilish invention in Hell; an invention which allows a base and cowardly hand to take the life of a brave knight, in such a way that, without knowing how or why, when his valiant heart is full of courage, there comes some random shot--discharged perhaps by a man who fled in terror from the flash the accursed machine made in firing--and puts an end in a moment to the consciousness of one who deserved to enjoy life for many an age."

Once handguns became cheaper and easy to use--beginning in the seventeenth and eighteenth centuries--they became weapons for common individuals to attack elite power, which brought a democratization of power.  I will turn to this in a future post on the American Revolution and Civil War.