In my last post, I commented on Ronald Beiner's Dangerous Minds: Nietzsche, Heidegger, and the Return of the Far Right.  I challenged him to present some empirical evidence supporting Nietzsche's claim that liberalism throws everyone into the degraded and spiritless life of the "last man."  In one of his comments on the post, Beiner responded with a question: "Have you watched American TV recently?"

Of course, this is the standard response of intellectuals who insist that the cultural degradation of bourgeois liberalism is clear in popular culture--particularly, American TV.  But where's the empirical evidence to support this assertion?  We have had experience with over 70 years of regular network television broadcasting.  If Nietzsche's "last man" critique of liberalism is correct, then we could predict that there has been a steady decline in the cognitive complexity of TV programming over these years--from dumb to dumber.  This is a testable prediction.

Since I was born in the United States in 1949, just when families were beginning to purchase television sets for the first time, I grew up during the "golden age" of network television broadcasting, so I can remember "The Honeymooners," "I Love Lucy," and "The Lone Ranger."  Channel surfing today, I occasionally jump to some reruns of these original shows on Nick At Nite.  But I don't watch them for long, because they're so boring!  If I do watch them for a while, it's only to laugh at them for how dumb they were.  Haven't we all had the same experience?  Doesn't this suggest that we have become accustomed to more recent television programming that is more entertaining for us than the first shows, because the new shows are more cognitively challenging?  If so, then either we are becoming smarter, or TV is making us smarter, or both.  And if that is so, then our culture in our liberal society is becoming smarter, which contradicts the Nietzschean last man prediction of a dumbing down culture.

This subjective impressionistic evidence can be confirmed by some objective quantifiable evidence that TV shows have been increasing in their cognitive complexity.  In 2005, Steven Johnson published his book Everything Bad Is Good for You: How Today's Popular Culture Is Actually Making Us Smarter.  An excerpt from the book was published as an article in The New York Times with the title "Watching TV Makes You Smarter."  He argued that contrary to the common assumption that mass popular culture is always declining to lower standards, culture is actually becoming more cognitively demanding, as illustrated by TV programming.  He pointed out that programming on TV is increasing in its demands on our mental capacities, as indicated by increasing complexity in three elements: multiple threading, flashing arrows, and social networks.

Multiple threading refers to the multiplicity of narrative threads in a TV show.  In the 1950s, a typical episode of "Dragnet" had only one story line--crime scene, investigation, cracking of the case--with only two or three main characters.  In the 1980s, an episode of "Hill Street Blues" would have as many as 10 story lines interweaving with many primary characters; and each episode would pick up a few threads from previous episodes and leave some threads open at the end.  In contrast to "Dragnet," viewers had to mentally sort out a complex narrative structure with a complex collection of characters and a complex subject matter.  Later, shows like "The Sopranos" and "ER" became even more complex--with more simultaneous threads, more characters, and more complex subjects.

The flashing arrow is Johnson's term for what he calls narrative hand-holding.  The movie "Student Bodies" was a parody of slasher movies like "Halloween" and "Friday the 13th."  In one scene, the teenage baby sitter hears a noise, opens the door of the house, sees nothing, and then goes back into the house as the door shuts behind her.  The camera swoops in on the doorknob, and we see the door is unlocked: there's a flashing arrow on the screen and the words "Unlocked!"  That's a parody of what popular stories often do: a script inserts someone to tell the viewer some important information for the plot.  Today, popular TV shows don't rely as much on such flashing arrows, thus leaving viewers to figure out what's going on for themselves, which appeals to the mind's pleasure in solving puzzles.

The third element of growing complexity is in social networks.  Much of story telling is about exploring the complexity of social life.  How are these characters related to one another?  What is motivating them?  Are they deceived about one another?  What are their underlying strategies?  Modern TV shows increasing  force viewers to probe ever deeper social complexity to figure out what is going on.

Moreover, Johnson suggests, the greater cognitive complexity of TV shows today makes them more profitable, because now people can watch TV shows multiple times through reruns and see nuances that were not clear in the first viewing.  There are even fan sites on the Internet where fans can comment on the shows.  Think about "The Game of Thrones," for example.  Or the Socratic comedy of "The Simpsons." (Thousands of students at the University of California at Berkeley have been introduced to the history of philosophy through a course on "The Simpsons and Philosophy.") 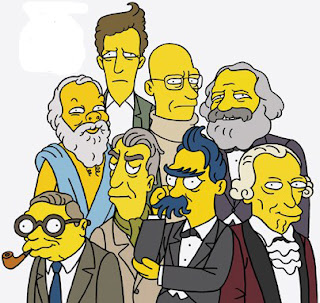 We might explain this through an evolutionary science of liberalism.  First, we have evolved to be storytelling animals (as Jonathan Gottschall has said), because storytelling is an evolved adaptation of the human mind for mentally simulating the complex problems of social life and imagining how best to navigate through that social complexity.  Popular culture like TV is largely entertaining storytelling that appeals to that evolved adaptation.  And in the every growing social complexity of a liberal pluralist society, embracing millions of individuals cooperating and competing with one another in spontaneous orders without any central planning, the storytelling becomes ever more cognitively challenging.

Another part of this is the amazing increase in average intelligence (as measured by IQ) in liberal societies over the past hundred years, which is called the Flynn Effect (for James Flynn, who has written about it).  Apparently, liberal societies have brought increasing levels of education, and particularly the cognitive challenges of scientific education, which really has brought "Enlightenment," as people in liberal social orders have become smarter.  And this increasing intelligence has brought with it increasing moral intelligence, which Steven Pinker has identified as the "moral Flynn effect."  (I have written about his in posts here, and here.)

"Have you watched American TV recently?"  Well, yes, we might answer, and we can see evidence there that the "last man" of American liberal culture is far smarter than Nietzsche predicted.
Posted by Larry Arnhart at Sunday, May 13, 2018

The Liberal (defined in the broadest sense) society is the terminal condition of any state.
The logic of Liberalism leads to the adoption of public policies which ultimately will undermine the conditions necessary for a Liberal state to exist.
The liberal state (in order to remain liberal) must allow non- liberals(those who oppose one or more of the central tenets of Liberalism) to organize,publicize their views, and try to come to power.
Power they might use to end the liberal order.
The liberal is faced with a dilemma as soon as non- liberals begin to make inroads into government.
Which "value" is most valuable?
How do we determine this?
WHO determines this?
Is democracy a necessary requisite of a Liberal society?
Can non-liberals try to persuade voters to adopt their policies?
Can the people be denied the right to hear, read or otherwise consider policies Liberals don't like?
Western societies are facing this now.
The treatment of Nationalist parties and their members(disingenuously called Fascist or Nazis) is the true test of the strength of Liberalism today.
Nationalist are the heretics in the contemporary Western Orthodoxy.
Just as Medieval and Early Modern European Christians generally tolerated Jews,but persecuted Christians who rejected some tenet of Orthodoxy.
So do Liberals tolerate different races, religions,languages,but Europeans and European- Americans which question or reject the "faith" are socially ostracized, considered morally repugnant, physically attacked, even imprisoned.
The future of the liberal order,as I believe in it, is endangered.
The greatest threat isn't the far right,but Liberalism's spawn, "Progressivism" ,Communism and Social Democracy.

My kids love "Arthur" on PBS. The science teacher has two goldfish, named "Vladimir" and "Estragon." Yes, that was a "Waiting for Godot" reference.