The Progressive View of Presidential Leadership in Claremont Trumpism 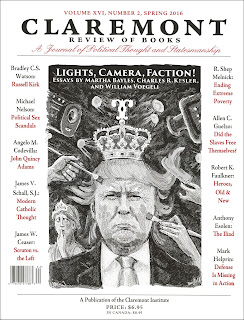 Heilbrunn gives an accurate account of how the West-Coast Straussians of the Claremont Institute have adopted Trump as their leader.  He fails, however, to notice the fundamental contradiction in their position.  He correctly identifies the Claremont argument that America needs to return to the principles of the American constitutional founding that have been eroded through the corrupting influence of American progressive thought beginning with Woodrow Wilson.  But he does not notice how their support for Trump's populist leadership depends upon their adopting the progressive view of the president as a "man of the people" whose leadership must transcend the checks and balances of the founders' Constitution.

Heilbrunn does not comment on the picture of Trump on the cover of the Claremont Review:  Trump has the crown of a monarch on his head!  This suggestion that the American president can and should have the royal prerogative powers of a monarch contradicts the argument of the American founders that the president as constrained by the Constitution does not have monarchic powers (as indicated, for example, in The Federalist number 67).  But this does conform to the claim of the American progressives like Woodrow Wilson that the Constitution was flawed in establishing a "leaderless democracy," and that the president needed to break free of the constitutional system in exercising populist leadership.

Moreover, Heibrunn does not notice that this progressivist view of presidential leadership is defended by Charles Kesler in that spring 2016 issue of the Claremont Review.  Kesler speaks of Trump as a "strong leader" in the tradition of Teddy Roosevelt and Woodrow Wilson.  Kesler quotes Wilson's claim that "the President is at liberty to be as big a man as he can," and he quotes Wilson's declaration that "the personal force of the President is perfectly constitutional to any extent which he chooses to exercise it."  Kesler observes: "'Personal force'--not far from Trump's praise of high energy, toughness, and strength in the ideal chief executive."

Kesler praises Trump for taking "a tough position in tough terms." After all, Kesler observes, "every republic essentially faces what might be called the Weimar problem.  Has the national culture, popular and elite, deteriorated so much that the virtues necessary to sustain republican government are no longer viable?"  In such times, the nation needs a "strong leader."

Thus, Kesler implies that Trump is doing for the United States what Adolf Hitler did for Germany.  Hitler promised to make Germany great again.  Like Weimar Germany, the United States needs someone "to be as big a man as he can."  After all, as Trump has said, in one of his favorite quotations from Mussolini, "it is better to live one day as a lion than 100 years as a sheep."

If this follows from the teaching of Leo Strauss, then Will Altman was right to argue that Strauss was promoting Nazism, because he saw classical liberalism as so decadent that it needed the spirited manliness of Nazism--or  Donald Trump--to save it.  One of the writers at the Journal of American Greatness, in an article on "Paleo-Straussianism," has said of Strauss that "the philosophic mind he admired the most belonged to a Nazi."  Altman has argued that Strauss's praise for Martin Heidegger and his refusal to repudiate Heidegger's Nazism is good evidence for Strauss's acceptance of Nazism, or at least some radically illiberal alternative to the liberal regime.

Altman cited Strauss's comments about how every healthy society must be a "closed society" rather than an "open society."  The Trumpist Straussians seem to conform to this  by agreeing with Trump's claim that to make America great again, America must become a closed society not open to Muslims and immigrants from non-European countries.

And yet, contrary to the Claremont Institute's progressive view of presidential leadership, which would allow Trump "to be as big a man as he can," the first year of Trump's presidency has shown that the constitutional limits on presidential power have frustrated Trump's hopes for one-man rule.  In a recent New York Times article, it is reported: "Mr. Trump's difficult adjustment to the presidency, people close to him say, is rooted in an unrealistic expectation of its powers, which he had assumed to be more akin to the popular image of imperial command than the sloppy reality of having to coexist with two other branches of government."

It is said that in his first few months in office, Trump regularly barked commands at Senators.  But then, in one meeting, Senator Bob Corker snapped back: "I don't work for you, Mr. President."  In another meeting, Trump repeatedly cut in while Senator Mitch McConnell was making an elaborate presentation on the complexity of health care, until McConnell told the President: "Don't interrupt me."

So maybe the constitutional system of checks and balances really does work as it was intended by the framers to frustrate populist demagogues like Trump.  And maybe we will see that when Trump is impeached or forced to resign.

(In this post, I have used some passages from a previous post.)
Posted by Larry Arnhart at Friday, December 08, 2017