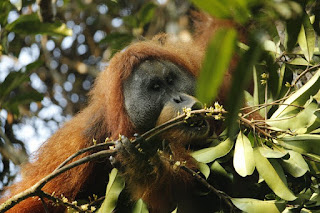 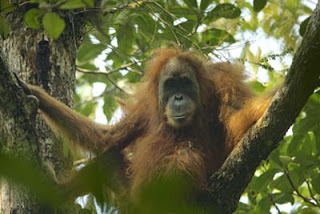 Primate taxonomists have identified six living species of non-human great apes: Sumatran and Bornean orangutans, eastern and western gorillas, chimpanzees, and bonobos.  The Sumatran and Bornean orangutans were first identified as separate species in 2001.  Now, a team of biologists has identified a third orangutan species--the Tapanuli orangutan Pongo tapanuliensis (pictured above). The orangutans are our most distant evolutionary relatives among the living hominids, and now the Tapanuli orangutan seems to be the oldest evolutionary lineage in the genus Pongo.  The New York Times has an article on this, which includes a link to the report: Alexander Nater et al., "Morphormetric, Behavioral, and Genomic Evidence for a New Orangutan Species," Current Biology 27 (November 20, 2017): 1-12. 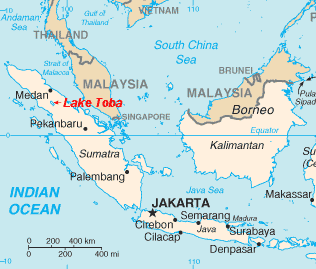 As I have indicated in a previous post a few years ago, I am sure that Jean-Jacques Rousseau would have been fascinated by these studies, because he inferred from some reports about apes in the wild that savage man in the state of nature was actually an orangutan as "a sort of middle point between the human species and the baboons."  He looked forward to the time when scientists would travel the world to study the ape ancestors of human beings to understand the evolutionary history of humanity in the state of nature.

Rousseau would have discovered, however, that these modern studies deny his claim that the earliest human ancestors were utterly solitary animals, and thus "man is naturally good," because solitary individuals free from any dependence on others have no motive to be wicked.  In fact, orangutans have a complex social life organized around the social bond between mothers and their offspring and a dominant adult male.

Here, then, is an example of how a claim in political philosophy--Rousseau's account of an asocial state of nature--can be refuted by the empirical science of evolutionary biology.

Recently, Nelson Lund--in his book Rousseau's Rejuvenation of Political Philosophy: A New Introduction (New York: Palgrave Macmillan, 2016)--has tried to defend Rousseau's position as confirmed by modern primatology and anthropology.  He concludes: "Orangutans live much like man in Rousseau's pure state of nature; gorillas generally live in patriarchal family bands, much as Rousseau imagines man must have lived after the 'first revolution'; and chimpanzees are cooperative and contentious hunter-gatherers, like the people in Rousseau's 'nascent society'" (54).

Lund fails to see, however, that the complex social life of orangutans is not at all like the utterly solitary life of Rousseau's "nascent man" in the state of nature.  I have elaborated this point in my chapter on Rousseau in Political Questions: Political Philosophy from Plato to Pinker (2015).

Rousseau's interest in orangutans as possibly revealing the ancestral origins of human evolution is well studied in Robert Cribb, Helen Gilbert, and Helen Tiffin's Wild Man from Borneo: A Cultural History of the Orangutan (Honolulu: University of Hawaii Press, 2017).

I am grateful to Professor Arnhart for his comment on my book. After reading the relevant passages about Rousseau in his book, Political Questions, however, I’m afraid that I disagree with his claim that I “fail[ed] to see . . . that the complex social life of orangutans is not at all like the utterly solitary life of Rousseau’s ‘nascent man’ in the state of nature.”

As I discussed in my book, some extant orangutans live a solitary life in which adults have little social interaction except for the relatively long lasting relationship between mothers and their offspring, just like Rousseau’s “nascent man.” As I acknowledged, orangutans living in densely populated environments have more social interaction, and all orangutans are capable of very complex social relationships with others of their species and with ours as well. All of this is consistent with Rousseau’s picture of a uniquely “perfectible” animal that was prepared by nature for complex social relations but did not need to have them and might not have had them until environmental changes or migration into new environments gave them a reason to have such relations.

Contrary to what this blog post led me to expect, the relevant passages in Professor Arnhart’s Political Questions are largely consistent with what I said about orangutans and about Rousseau. He does say at one point that “modern anthropological and biological research indicates that even our earliest ancestors live in social bands of extended families.” He provides no support for this statement, and my book rebuts a similar claim by Roger Masters.

I am mystified by Professor Arnhart’s mistaken claim that Rousseau’s nascent man is “utterly solitary.” Rousseau acknowledges that the earliest human females would have cared for their children until they were capable of caring for themselves, just like orangutans do. I am also mystified by his apparent claim that all orangutans have a “complex social life” beyond the mother-child relationship. Strangely, his book quotes what Birute Galdikas says about the orangutans that she studied for many years: “Individual orangutans rely on no one other than themselves. They have been released from dependence on others of their kind.” As I discussed in my book, Galdikas (in a book that Professor Arnhart does not cite) gives a detailed account of the orangutans of Borneo, which do not have the “complex social life” that Professor Arnhart mistakenly thinks I have failed to see.

In the first stage of the state of nature, Rousseau sees our ancestors "wandering in the forests, without industry, without speech, without domicile, without war, and without liaisons, with no need of his fellow men, likewise with no desire to harm them, perhaps never even recognizing anyone individually." He sees "an animal . . . satisfying his hunger under an oak, quenching his thirst at the first stream, finding his bed at the foot of the same tree that furnished his meal; and therewith his needs are satisfied."

Isn't this a description of an utterly solitary condition? It is only in the second stage of the state of nature, Rousseau claims, that human beings show "nascent society" in the establishment of family life.

Orangutans show a complex social structure. The strongest social bond is between a mother and her offspring. She nurses her child for at least seven years, and even after weaning, the child will stay close to her for a year or two. There are other social structures as well. Orangutans live in loose communities organized around a dominant adult male who is intolerant of other adult males. Adult females prefer to mate with the same dominant male, who might protect their offspring from infanticide by subordinate males. The younger sub-adult males and females often travel together and play with one another. Mature females tend to settle close to their mothers and sisters.

This social life allows for social learning, which creates cultural traditions that distinguish one orangutan community from another. Various skills, such as tool use and nest building, and communication signals are passed from generation to generation through social learning.

I said that orangutans live “much like” man in Rousseau’s pure state of nature. I did not say that there are no differences.

Contrary to what Professor Arnhart says in the last sentence, Rousseau indicates that nascent man “perhaps” never recognized anyone individually. Contrary to what Professor Arnhart seems to suggest, Rousseau’s description of the mother-child social structure among nascent man is consistent with modern scientists’ description of mother-child relationships in orangutans. Furthermore, as Birute Galdikas has documented in great detail, many orangutans spend almost their whole adult lives having very little contact with other adults, other than sexual encounters, and thus live “much like” Rousseau’s nascent man.

Professor Arnhart’s misplaced effort to refute what I said is much less important than the error about Rousseau in this sentence from his initial post: “Here, then, [i.e. modern studies of orangutan life] is an example of how a claim in political philosophy--Rousseau's account of an asocial state of nature--can be refuted by the empirical science of evolutionary biology.” Rousseau could not and did not claim that orangutans are nascent men. Let us suppose that orangutans did not exist, or were as naturally social as chimpanzees. Even if that were true, Rousseau’s speculation about an original asocial state of nature in which our ancestors lacked speech and did not form families would stand completely unrefuted. What Professor Arnhart calls the empirical science of evolutionary biology can offer only its own speculations about the social lives of our earliest ancestors.

Rousseau’s description of the pure state of nature may be wrong. And, as I discussed in my book, he may not think that anything in his political philosophy would be threatened by proof of its inaccuracy. But so far, at least, his speculations have not been proven wrong by any actual empirical science. And nothing anyone could ever discover about orangutans would constitute such proof.

Let us keep in mind that if we're looking for a fully human state of nature, we would have to infer what life was like for human nomadic hunter-gatherers living in stateless societies. That's why Locke looked to the American Indians: "In the beginning, all the world was America." In this condition, human beings would have been intensely social.

Anthropological archaeologists like Kent Flannery and Joyce Marcus who try to defend Rousseau's history have to skip over Rousseau's first stage and begin with his "nascent society."

The important thing to keep in mind, actually, is that Rousseau was not looking for a “fully human” state of nature when he tried to imagine what the pure state of nature would have been like. That’s why he used the term “nascent man,” and described a stupid animal that lacked the distinctively human institution of speech, i.e. compositional language.

When Rousseau did look for a “fully human” state of nature, which he calls nascent society or the last stage of the state of nature, he does indeed draw inferences from hunter-gatherer societies. This has nothing to do with orangutans.

That's well stated. I can agree that Rousseau did not see the pure state of nature as a "fully human" state of nature, which came only with the "nascent society" of nomadic hunter-gatherers.

I am still not persuaded, however, that there are any ancestral primate species that would show the solitariness that Rousseau sees in the pure state of nature. Even orangutans, who often do seem to wander for long periods as solitary individuals (particularly, adult males), show a more complex social life than life in Rousseau's pure state of nature.

In a later post (September 6, 2018), I have conceded that Lund could be right if Rousseau's "nascent man" in the pure state of nature is compared with those primates that are solitary but not asocial, which includes lemurs, galagos, tarsiers, and orangutans.