Sapolsky on the State of Nature: Hobbes or Rousseau? Why Not Locke?

Weighing the evidence and arguments in this debate supports the conclusion that Hobbes was partly right, Rousseau was mostly wrong, and Locke was mostly right.  I have argued for this assessment in various posts (here, here, and here).

It is surprising to see how this modern debate repeats the same pattern over and over again.  First, it's assumed that the only choice is between Hobbes and Rousseau.  Then, some people try to argue for the Hobbesian position, and others try to argue for the Rousseauian position.  And yet, eventually most agree that neither extreme position is completely right.  But they cannot recognize the Lockean position as superior to both, because they haven't thought about Locke's argument, or how the evidence gathered by modern scientists might confirm what Locke says.

So, for example, much of the debate over the past 20 years was initiated by Lawrence Keeley in War Before Civilization: The Myth of the Peaceful Savage (1996).  He frames the debate as a choice between Hobbes and Rousseau (5-32).  And, as the subtitle of his book indicates, he seems to take the side of Hobbes against Rousseau.  But then he concedes that neither Hobbes nor Rousseau got it right: "If Rousseau's primitive golden age is imaginary, Hobbes's perpetual donnybrook is impossible" (178).  And yet he never considers the possibility that the archaeological and anthropological evidence that he surveys in his book could be seen as supporting Locke's position as mostly right.

One can see the same pattern repeated in the debate sparked by Steven Pinker's The Better Angels of Our Nature: Why Violence Has Declined (2011).  In a report on this debate in Science, the author says that the debate is rooted in the dispute between Hobbes and Rousseau; and he identifies some scholars as Hobbesians and others as Rousseauians (Andrew Lawler, "The Battle Over Violence," Science 336 [2012]: 829-30).  But then he reports that most scholars agree that neither Hobbes nor Rousseau are completely right.  "They do not argue for a Rousseauian perspective. But that doesn't mean they're ready to embrace a Hobbesian view, either" (830).  The reader is left wondering whether there is some third alternative that is closer to the truth.

I see this pattern again in Robert Sapolsky's new book Behave: The Biology of Humans at Our Best and Worst (2017).  Sapolsky is a primatologist (particularly, a baboonologist) and neuroscientist at Stanford University, who is famous on the Stanford campus for his popular lecture courses, and also famous around the world for his lectures on YouTube from his course "Introduction to Human Behavioral Biology" that have attracted over a million views.

I first heard him lecture at Stanford in 1988 when I was auditing courses in the Program in Human Biology.  Now, in his new book, we have a massive (790 pages in small print!) magnum opus that brings together much of his thinking from that human behavioral biology course.  The book also has the casual hipster wit that makes his lecturing so engaging for students.

Sapolsky's book is a comprehensive textbook surveying all of the work over the past forty years--since the publication in 1975 of E. O. Wilson's Sociobiology--on the biological bases of social behavior.  Like his teacher Melvin Konner, Sapolsky explains behavior as arising from a complicated interaction of many biological, psychological, and cultural factors, in which every single factor exercises some causal power only in the context of all the other factors.  He is particularly interested in explaining social cooperation (humans at our best) and violent aggression (humans at our worst).

Explaining the deep evolutionary roots of human violence leads him into the debate over whether warfare is rooted in the evolved human nature of our ancient nomadic hunter-gatherer ancestors, or whether war is a relatively recent cultural invention that began only a few thousand years ago when human beings moved into sedentary agricultural societies ruled by militaristic states.

Here he follows the recurrent pattern in this debate that I have just sketched.  He says the debate is "Hobbes-versus-Rousseau" (305-27).  He generally takes the side of the Rousseauians--particularly, Douglas Fry--in criticizing the Hobbesians (Keeley, Pinker, Wrangham, Napoleon Chagnon, and others).  And he tells the story of how a baboon troop that he studied in Kenya experienced a change in their social culture, so that they became less aggressive and more peaceful, less Hobbesian and more Rousseauian, which shows the cultural flexibility emphasized by the Rousseauians.  But then he concedes that neither Hobbes nor Rousseau got it completely right.  "So, Hobbes or Rousseau? Well, a mixture of the two, I say unhelpfully" (325).  He never mentions Locke or considers whether a Lockean account of the state of nature might be best.

In reviewing Sapolsky's book for the New York Times Book Review, Richard Wrangham generally praised the book.  But he also criticized Sapolsky for becoming a "partisan critic" in his account of the Hobbes-versus-Rousseau debate over the evolution of human violence.  Sapolsky's Rousseauian partisanship is subtle in that it depends mostly on his remaining silent about evidence and argumentation that contradict the Rousseauian claims.  For example, he endorses Marshall Sahlins' claim that nomadic  hunter-gatherers were "the original affluent society" (317-18).  But he is silent about the anthropologists who have shown  that Sahlins' argument is not supported by the evidence, which I have indicated in a previous post.

Similarly, Sapolsky relies on the research of Douglas Fry to support the conclusion that nomadic hunter-gatherers have always been peaceful (322).  But Sapolsky is silent about the many criticisms of Fry's reasoning, which I have surveyed in a previous post.  For example, Fry has failed to recognize that many of the modern hunter-gatherer bands that he has identified as peaceful have been surrounded by militarily superior farmers, and so it's hardly surprising that the hunter-gatherers have not gone to war in such circumstances.

Sapolsky says that there is no archaeological evidence for warfare among Paleolithic hunter-gatherers.  There is, however, one recently discovered site in northern Kenya dated at around 10,000 years ago that had the skeletons of 27 people killed in a massacre.  Sapolsky says that this is not evidence for ancient warfare among nomadic hunter-gatherers, because the victims here seem to have been sedentary hunter-gatherers, who were living along the shoreline of Lake Turkana, where there was probably abundant fish and game animals; and so the attackers wanted to steal this "prime beachfront property" (321).

Sapolsky does not tell the reader that the discoverers of this site could not agree on this.  As I indicated in a previous post, one member of the team accepted the interpretation repeated by Sapolsky--that this is evidence for ancient warfare arising among sedentary hunter-gatherers, who were no longer living a nomadic life.  But another member of the team had a different interpretation.  She said that while there is lots of evidence of warfare "among settled, sedentary communities," the discovery in Nataruk is the first "archaeological record of armed conflict between early nomadic hunter-gather groups."  She suggested that the foragers who were massacred had not established a settlement on the lake, but rather they were a "small traveling band of hunter-gatherers who stopped by a lagoon to hunt or fish."  And so, she seemed to adopt the Hobbesian interpretation of this archaeological discovery as confirming that warfare was prevalent among our earliest foraging ancestors, and thus deeply rooted in our evolved human nature.

But no matter which interpretation one accepts, this confirms Locke's claim that our ancient hunter-gatherer ancestors lived in a state of peace that easily became a state of war whenever there was any resource worth fighting over--like a good fishing spot.

Sapolsky seems to agree with this when he says that even purely nomadic hunter-gatherers "are no tie-dyed pacifists," because they often engage in lethal violence (323).  If so, then Sapolsky's account of the state of nature is neither Hobbesian nor Rousseauian but Lockean.

But what about Sapolsky's baboons, who showed, he argued, that even if their evolved nature is Hobbesian, they can develop a social culture that taps into their "inner Rousseau"?  I have written a post on Sapolsky's earlier reports of this in 2004 and 2013.  In his new book, he emphasizes the great "flexibility" and "social plasticity" that this shows in baboon life, which sounds like what Rousseau identified as the "perfectibility" of human ancestors, so that nature put no limits on how far human beings could be transformed by cultural history. 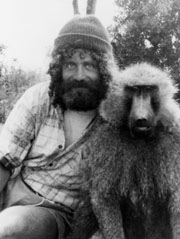 In the earlier reports, however, Sapolsky suggested that baboon "perfectibility" is not unlimited.  The changes brought by cultural history are "within the limits of baboon sociality," and the new culture of Forest Troop did not bring "an unrecognizably different utopia."  There was still a dominance hierarchy.  There was still displacement aggression, although it had been reduced.  And while the rate of reconciliations had increased, the need for reconciliations showed the persistence of conflict.  Sapolsky even indicated that the overall rate of aggressive conflict in Forest Troop was similar to other troops.  So despite the cultural malleability shown here, "there are not infinite amounts of social plasticity in a primate social system."

I have argued that we see three levels of social order in these baboons--baboon nature, baboon culture, and baboon individuals.  The repertoire of social behavior characteristic of a baboon species sets the natural limits of baboon sociality.  This baboon nature constrains but does not determine baboon culture.  And, finally, nature and culture constrain but do not determine individual behavior.

I will be writing more posts on Sapolsky's book.

As a pre-medical undergraduate at Stanford '90-'94 I attended Sapolsky lectures as part of the biology curriculum a couple of years after you were there. "Casual hipster wit" indeed! He is a truly gifted speaker in those settings who crafted his lectures to always end on a fascinating note with great flourish. This is an interesting post, as always. Since Rousseau's anthropology is so clearly wrong, those who disagree with the "Hobbesean" position should embrace your (clearly correct) formulation. One wonders if they resist the "Locke>Rousseau" description for other, perhaps modern political, reasons?

Rousseau. Hobbes. Right. Left. Instead of science, a less than engaging ideological political framing taints the less than accurate conclusion. Hobbes or Rousseau, is a parlor game - toss in Locke.

Your passage, below, is telling. The statements are speculative. Nor is there evidence indicating warfare was prevalent and thus deeply rooted in our nature. It is simply argumentative. It has very little to do with confirming any tenets of Hobbesian political philosophy or a larger understanding of our biological nature. A 17th century mind, being exactly that, no matter his evident genius. Neurobiology, far afield from the science of Hobbes and the century within which he dwelled. She adapted a Hobbesian interpretation? Eh? It's an archaeological interpretive technique? My god, man, are you daft?

Sapolsky does not tell the reader that the discoverers of this site could not agree on this. As I indicated in a previous post, one member of the team accepted the interpretation repeated by Sapolsky--that this is evidence for ancient warfare arising among sedentary hunter-gatherers, who were no longer living a nomadic life. But another member of the team had a different interpretation. She said that while there is lots of evidence of warfare "among settled, sedentary communities," the discovery in Nataruk is the first "archaeological record of armed conflict between early nomadic hunter-gather groups." She suggested that the foragers who were massacred had not established a settlement on the lake, but rather they were a "small traveling band of hunter-gatherers who stopped by a lagoon to hunt or fish." And so, she seemed to adopt the Hobbesian interpretation of this archaeological discovery as confirming that warfare was prevalent among our earliest foraging ancestors, and thus deeply rooted in our evolved human nature.

I pointed out that Sapolsky is silent about the debate over the human fossil findings at Lake Turkana. Why is it "daft" to point this out?