The Storytelling Instinct in Tolkien's "Lord of the Rings"--Christian? Pagan? Wagnerian? 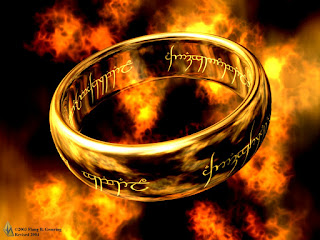 Next week (August 18-20), the Ravinia Festival in Highland Park, Illinois, will have three nights devoted to Peter Jackson's film trilogy of J. R. R. Tolkien's Lord of the Rings.  The movies will be projected on large screens, and the Academy Award winning music by Howard Shore will be played by the Chicago Symphony Orchestra with a chorus of singers.  My family and I have pavilion seats for all three nights.  A few years ago, we were at Ravinia for the third movie--The Return of the King.

This will give me a good opportunity to think about the powerful appeal of Tolkien's story, and what this might reveal about storytelling as an evolved instinct of human nature.

In the run up to the year 2000, several major polls asking people "What was the greatest book of the twentieth century?" found that first place went to The Lord of the Rings.  This irritated many literary critics who dismissed Tolkien's fantasy story of Middle Earth as a bad fairytale for children that has become a low form of escapist fantasy for some adults.  And yet many people have found this to be one of the most powerful works of fiction they have ever read.  Jackson's film versions of the book--beginning with the Fellowship of the Ring in 2001--have become some of the most popular films of all time.

So what is it about Tolkien's story that makes it so attractive and so moving for so many people?  Does it show us, as Jonathan Gottschall has argued in The Storytelling Animal, that stories make us human, that storytelling is unique to human beings as part of their evolved nature?  If so, is there something about Tolkien's story that satisfies that storytelling instinct better than most other stories?  Or are the critics correct in dismissing this as a childish fantasy story?

Many Christians have seen The Lord of the Rings as a profoundly Christian book, or more particularly as a profoundly Catholic Christian book.  Tolkien was a devout English Catholic.  And in 1955, one year after the publication of the book, he wrote to the English Jesuit Robert Murray: "The Lord of the Rings is of course a fundamentally religious and Catholic work; unconsciously so at first, but consciously in the revision.  That is why I have not put in, or have cut out, practically all references to anything like 'religion,' to cults or practices, in the imaginary world.  The religious element is absorbed into the story and the symbolism."

But notice the strange manner in which he speaks here.  "Of course" it is "a fundamentally religious and Catholic work," and that is "why" the book has almost no references to religion!  In fact, when the book was first published, many readers were surprised that there were no overt indications of any religious practices or beliefs in Tolkien's fictional world.  Some readers have found Tolkien's "of course" to be an implausible effort by Tolkien to turn this into a Catholic Christian book, even though it is completely silent about religion.

Some Christian readers have responded by defending Tolkien's claim that "the religious element is absorbed into the story and the symbolism," by pointing to what Tolkien said in his essay "On Fairy Stories," which can be found online.

Tolkien sees fairy stories as the highest expression of the innate human capacity for fantasy--the uniquely human capacity for using language to create a "secondary world" of narrative fiction beyond the "primary world" of our ordinary experience.  In creative fantasy, Tolkien claims, we act as "sub-creators."  We are makers of art because we were made in the image and likeness of a Maker.  Our Creator, who created everything from nothing, created us to be sub-creators.   As storytellers, we manifest a storytelling instinct that belongs to us as part of God's Cosmic Story.

Darwinian scientists like Gottschall can explain this human storytelling instinct as the product of a purely natural process of human evolution:  we evolved to tell stories that help us navigate the complex social problems that we face as human beings, just as flight simulators help pilots to anticipate the problems they will face as pilots, and this social intelligence that we gain from stories that simulate social life enhances our chances for survival and reproduction in complex human societies.

According to Tolkien, in "On Fairy Stories," the highest function of fairy-stories is the "Consolation of the Happy Ending"--the joy of deliverance from evil and suffering, a deliverance that comes from the sudden turn to the "good catastrophe," a sudden and miraculous grace that denies the pervasive evidence for universal final defeat.

After all, Tolkien claims, "the Gospels contain a fairy-story, or a story of a larger kind which embraces all the essence of fairy-stories," because the Gospels give us the most complete "good catastrophe"--the birth, death by crucifixion, and resurrection of Christ and the prophecy of the Second Coming of Christ, so that human beings can be redeemed and resurrected to eternal life at the end of history, which gives human beings the deepest joy of knowing that the history of everything has a happy ending.  (Oddly, Tolkien says nothing about the eternal punishment of those in Hell.  Where's the happy ending for them?)

Tolkien told C. S. Lewis that Christianity was a myth, but a true myth.  What are the signs of a true myth as opposed to a false myth?

Tolkien's Christian readers might say that even though The Lord of the Rings says nothing overtly about religion or Christianity, it can still be a Christian story in so far as it shows "a gleam or echo of evangelium in the real world."

But that "gleam or echo" of the Christian Story seems very dim to those many readers of The Lord of the Rings who see that Tolkien's story draws much more from the pagan traditions of Nordic Europe and the folklore of fairy-tales than it does from Christian traditions of thought.  Tolkien's world of wizards, elves, dragons, magic, witchcraft, and reincarnation, a world of dark fatalism and death with no prospect of final redemption and immortality, seems very far from a Christian world.  Indeed, many, maybe most, of those readers who think this book is the "greatest book of the twentieth century" are not Christians, and they see no Christian message in the book.  Even many Christian parents don't see this as a good book for teaching Christian lessons to their children.

Moreover, the anti-Christian paganism of this book becomes even more evident as soon as one notices the influence of Richard Wagner's Ring cycle of four operas--The Ring of the Nibelung.  Both Tolkien and Wagner drew deeply from Nordic mythology in their storytelling.

The Christian scholars of Tolkien have dismissed this idea by quoting his response to the Swedish translator of The Lord of the Rings who suggested parallels between Tolkien's book and Wagner's Ring cycle: "Both rings are round, and there the resemblance ceases."  The Christian scholars can also point to the obvious differences between the men: Wagner was an atheist socialist anarchist, and Tolkien was a Catholic traditionalist monarchist!

But if one lays Tolkein's book next to Wagner's libretto for the Ring cycle, the similarities are striking, as indicated in some articles by Alex Ross, James McGregor, and Stefan Arvidsson.

"The lord of the ring is the slave of the ring."  Since that line states one of the the fundamental themes of The Lord of the Rings, one might assume that it's a line from the book.  Actually, it's a line from Alberich's curse on the ring in scene four of Wagner's Rhinegold .  Arvidsson observes: "The fundamental idea of a ring endowed with power, a ring that confers power and wealth upon its bearer, while it also entices those who come in contact with it to evil deeds and breaks them down, is not found in the medieval sources. Rather, Tolkien must have borrowed it straight from Wagner."  Moreover, as Arvidsson indicates, the ten steps in Wagner's narrative history of the ring correspond in some manner to Tolkien's narration of the ring.

We know that Tolkien's friend C. S. Lewis was an avid student of Wagner's operas, that Lewis took Tolkien to a London performance of The Valkyrie, and that at one point the two of them set out to write a translation of that opera, the second in the cycle of four Ring operas.

In 1941, while he was writing The Lord of the Rings, Tolkien wrote in a letter: "Anyway, I have in this War a burning private grudge--which would probably make me a better soldier at 49 than I was at 22: against that ruddy little ignoramus Adolf Hitler (for the odd thing about demonic inspiration and impetus is that in no way enhances the purely intellectual stature: it chiefly affects the mere will).  Ruining, perverting, misapplying, and making for ever accursed that noble northern spirit, a supreme contribution to Europe, which I have ever loved, and tried to present in its true light."

The Lord of the Rings could be seen as Tolkien's effort to present "that noble northern spirit . . . in its true light" against the evil distortions of Hitler and Wagner.

I have written about the Hitler-Wagner connection in some previous posts (here and here).  I will think more about this in November, when I will see the new production of Wagner's Valkyrie by the Lyric Opera of Chicago, which is part of Lyric's new production of the entire Ring cycle.

I also want to think about how Wagner's operatic storytelling, which combines music, singing, and theatrical drama, compares with Tolkien's storytelling through language alone.  In "On Fairy Stories," Tolkien argues that storytelling is done best through words alone.

Jackson's movie trilogy--and also his movie version of The Hobbit--turns Tolkien's purely literary work into something like an opera.  This raises the question of whether Jackson's movies are better or worse than Tolkien's books.  Some people--Alex Ross, for example--argue that the movies are better than the books, because Shore's music employs Wagnerian musical artistry that deepens the emotional impact of the storytelling of Tolkien's words.

Shore deliberately composed his music to employ Wagner's operatic techniques in the Ring cycle: Shore's musical score includes over 100 leitmotifs (short musical phrases associated with particular people, places, or ideas) and singing by choir and soloists.  It's the most elaborate musical score in the history of cinema.  That's why the three performances at Ravinia, with the Chicago Symphony Orchestra, choir, and soloists, will be such a treat.

Shore evokes Wagner at the very end of the trilogy by echoing Wagner's final music closing the Ring.  Doug Adams (in The Music of the Lord of the Rings Films) describes it this way: "After a suite of musical highlights from The Return of the King, the orchestra introduces a new line, a series of lilting arpeggios climbing high over lapping chords.  This is Shore's nod to Richard Wagner's Gotterdammerung, the final opera in his Ring des Nibelungen."

Very interesting. I'm sure you noticed the similarity of watching three very long Peter Jackson movies (with full orchestration!) to watching four very long Wagner operas in a festival setting. Enjoy, but I hope you have an iron butt.