The Empirical Data for Human Progress through the Liberal Enlightenment 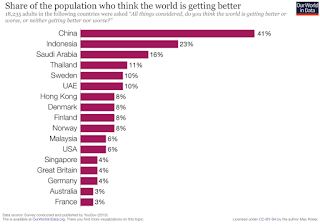 Human life today is better than it has ever been in human history, because we enjoy the benefits of two centuries of human progress through the Liberal Enlightenment.  Our time is the best of all times that human beings have ever known.

And yet most human beings around the world deny this.  As the above chart indicates, in surveys asking people whether the world is getter better, most people (94% in the United States, 96% in Great Britain and Germany) say no.  Many of those Americans who believe everything is getting worse voted for Donald Trump, because he appealed to their fear that America and the whole world are in decline, and because he persuaded them that only the leadership of a strongman can save them.

This popular pessimism is contradicted by empirical data that shows more human progress in the past two hundred years than at any time in previous human history.  For example, in public opinion surveys, most people around the world say that world poverty has been increasing.  In the United States, only 8% of the people believe that over the last 30 years the proportion of the world population living in extreme poverty has decreased.  But these 8% are correct. 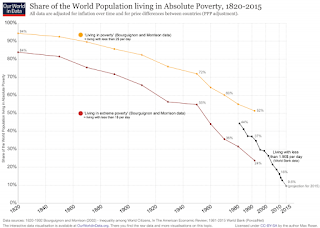 Perhaps the best place to find this kind of data is "Our World in Data" -- an online publication by Max Roser (an economist at Oxford University) that surveys the data on the development of human living conditions at a global scale.  Most of the data is presented in visual charts and global maps that show historical trends across time.

This data shows that human life in general is better today in at least ten ways:

Relying largely on the data collected by Roser, I will be writing a series of blog posts presenting some of the evidence for these ten progressive trends as caused by the norms and institutions of the Liberal Enlightenment that promote increasing freedom, knowledge, and technology.

I can foresee, however, that most readers will not be convinced by this evidence.  The reason for this is that the human mind has evolved cognitive biases that make it hard for us to believe that human life is improving and easy for us to feel worried and dissatisfied.

One such bias is what psychologists Daniel Kahneman and Amos Tversky call the "availability heuristic."  The more memorable an event is, because it's horribly shocking, the more probable we think it is.

So, for example, when we see shocking reports about terrorist attacks, we assume that such attacks are highly probable, and so we become terrified.  I remember a friend of mine in Manhattan, Kansas, telling me that when she first saw the television coverage of the 9/11 terrorist attacks in New York City and Washington, DC, she left her office, picked up her son at his elementary school, and returned home where she hugged him for hours.  Of course, she knew intellectually that her son in Kansas was in no danger of being attacked by terrorists.  But emotionally she felt as if her family was under attack.  Many Americans and many people around the world felt the same way that day.

In fact, that's the whole aim of terrorists--to throw an entire community of people into a state of panic.  After the killing of 14 people in a terrorist attack by radical Muslims in San Bernardino, California, in December of 2015, Trump proposed that all Muslims should be banned from entering the United States.  But very few Muslims become terrorists. And the statistical possibility of being killed by a terrorist in the United States is extremely low.  Ordinary homicide is more likely.  But even homicidal violence in the United States has been declining since a peak in the early 1990s.  Nevertheless, the reports of terrorist attacks have such a shocking impact on us that we are inclined to be thrown into a panic that distorts our judgment about what should be done to protect ourselves.

The great danger here is that if we do not recognize the human progress brought to us by liberal norms and institutions, we might become so fearful and angry that we will turn away from our liberal principles and embrace the illiberal rhetoric of a demagogue who promises to save us.

Although the human progress achieved by the Liberal Enlightenment is real, it is not inevitable, as should be clear from the catastrophic suffering brought into the middle of the 20th century by the illiberal regimes of Stalin, Hitler, and Mao.  The recent resurgence of ethnic nationalism in its attack on liberal globalism suggests that this could happen again.
Posted by Larry Arnhart at Tuesday, November 15, 2016

Thanks for this Larry.

Classic liberals are a distinct minority, it seems.

This is true even in the Anglosphere, where from the progressive left, increasingly in countries like Britain, Canada, and Australia free speech rights are being curtailed. The largely unaccountable administrative state in the U.S. has attained broad powers in legislation (through rule writing), in prosecution both civil and criminal, and in civil adjudication, where often we read the process itself is the punishment, and the potential disproportionate penalties an ever-present and overwhelming threat.

On the other hand, while any country to remain a country in a meaningful sense must be able to define and defend its territory (which does not preclude being zealously in favor of free trade with other nations), and while a thoughtful argument can likely be made to control rates of migration for the sake of maintaining not an ethnic state but a liberal political culture, certainly - as you are correct to point out - ethnic nationalism as a principle is illiberal and usually downright poisonous.

So the question, indeed: Whither Classic Liberalism? Is it inherently unstable?

Although few people embrace classical liberalism in its pure form, it is still true, as I will argue in my posts, that the modern world has become more liberal in its norms and institutions than ever before in human history.

For example, free trade is one of the primary principles of classical liberalism. And while completely free trade has never been achieved, the level of global trade today is higher than it has ever been in human history. People like Trump can try to reverse this, but the reduction in human well-being that this will produce will be evident.

How do you explain the differences in technological advances between East and West Germany and North and South Korea?

Is it really that crazy to think that life in developed countries hasn't been getting better in the last thirty years or so? Sure, life is much better than it was 200 years ago, but effective antibiotics, automobiles, vaccines, hormonal birth control, electricity, public sanitation (sewers and sewage treatment), air conditioning, microwaves, clothes washers and dryers, microwaves, etc., were all invented more than 50 years ago, and really not much anything of comparable significance has come along in the last 50 years. Tyler Cowen has a book about this titled the great stagnation. Also, it is hard to look at rates of family disruption and other measures of social capital and think that the US has become an appreciably better place in the last 50 years, save for civil rights and feminism. But those things haven't lead people to live better lives overall, for whatever reason. So in the US at least, people lives seem to have improved in terms of wealth, but in terms of the quality (and quantity) of their friendships, their marriages (and often lack thereof), their relationship and involvement in the lives or their children, and in their engagement and participation in the community, they are measurably poorer.