The Origin of Life (and Morality) 3.7 Billion Years Ago? 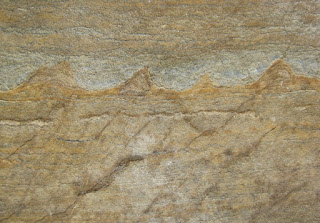 A 3.7-billion-year-old rock from the Isua Greenstone Belt in Greenland showing conical stromatolite-like structures that could be fossil evidence of bacterial activity, and thus the earliest signs of life on Earth.

One of the greatest unresolved mysteries in science is the origin of life.  There is today no generally accepted scientific account of exactly where, when, and how life originated on Earth.  Closely connected with this question is the question of whether life might have appeared elsewhere in the universe beyond the Earth.

This is a deeply human question because living beings like ourselves want to understand our place in the history of life, and of what that might say to us about the meaning and purpose of life.  Human beings have always heard mythic or religious stories about the origin of all things, including the origin of life and human life.  But now we wonder whether modern science can give us a scientific story of life's origins.  And if we are persuaded by such a scientific story, then we must wonder what this teaches us about how we fit into the history of the universe.

This week, an article for the journal Nature on what is claimed to be the earliest evidence of life has been published online.  Nicholas Wade has written about this for The New York Times.

The oldest fossil evidence of life is stromatolite fossils. A stromatolite (literally, "layered rock") is a solid structure created in shallow marine environments by single-celled microbes called cyanobacteria (blue-green algae).  The photosynthesizing cyanobacteria form colonies and trap sediment with their sticky surface coatings.  The trapped sediment reacts to calcium carbonate in the water to form limestone.  The formation of such microbial mats can be seen today in places like Shark's Bay in Western Australia.
Microbial mats are important for the study of early life on Earth because they are a macroscopic manifestation of microscopic life.  They can be preserved as macroscopic structures in the rock record, which are more easily identified than individual microbial fossils (microfossils).

In northwestern Australia (Pilbaria Craton), the Strelley Pool Chert is a 3.5 million-year-old sedimentary rock formation that seems to show stromatolite fossils.  Until recently, this has been thought to be the earliest fossil evidence for life on Earth (Allwood et al. 2006).  There's a YouTube video on this site.

But now a team led by Allen Nutman of the University of Wollongong in Australia is presenting evidence of stromatolite fossils in rocks from the southwest coast of Greenland that are 3.7 billion years old (Nutman et al. 2016).  If this is correct, this would be the earliest fossil evidence for life.  And yet while cyanobacteria might seem to us to be very simple forms of life, they are actually rather complex, and so they must have been preceded by the evolution of simpler forms of life much earlier than 3.7 billion years ago.

This research is important for astrobiology--the biological study of evidence for life beyond the Earth.  If we were to find rock formations like this on Mars, would this be evidence that life has evolved on Mars?

This research will provoke a lot of scientific debate.  First of all, there will be debate over whether these rock formations were really caused by microbial action, or whether they could have been formed by purely physical or chemical activity, so that this would not be evidence of ancient life. For a decade or more, scientists had assumed that American paleontologist William Schopf had found stromatolite fossils in rocks in Western Australia that were 3.5 billion years old (Schopf 1993).  But then Martin Brasier (a paleobiologist at Oxford University) challenged Schopf's evidence by arguing that the stromatolites presented by Schopf had actually been formed by geological processes, not by bacteria (Brasier et al. 2002).  Later, Brasier presented his own fossil evidence for life that was 3.4 billion years old, but here the fossil patterns were microscopic, with sizes and shapes suggesting a kind of bacteria that lives on sulfur and dies if exposed to oxygen (Wacey et al. 2011).  We can expect, then, that there will be similar criticism of Nutman's evidence.

Another problem for Nutman's research is that if cyanobacteria appeared 3.7 billion years ago, then the simplest forms of life must have evolved during the Hadean period of Earth's history (from 4.5 to 4 billion years ago).  This period is called Hadean because it was a "hellish" time for the Earth, during which the Earth was being bombarded by asteroids.  It's hard to see how life could have emerged and survived in these conditions.

What we see here is one of the fundamental problems of evolutionary science.  We cannot directly observe what happened billions of years ago.  Se we must rely on the indirect evidence of evolutionary history, such as the fossil record.  And that fossil record is limited and hard to interpret.

But at least we can adjudicate the scientific disputes by looking at whatever evidence we have and weighing the arguments over the interpretation of that evidence in the light of the competing scientific theories.

As I have indicated in a previous post, there is another side to this debate over stromatolite fossils that has to do with the evolution of morality.  Microbial mats form because hanging together allows these microorganisms to stick to the rocks in shallow sea water without being washed away by the tides.  By hanging together, these microorganisms are cooperating with one another for their mutual benefit.  And while we might not see this as morality in the strict sense, we might see it as at least incipient moral behavior.  The morality of human social cooperation could be seen as the culmination of a long history of life in which living beings have evolved to cooperate for their mutual benefit.  Something like this is suggested in Aristotle's biological works.