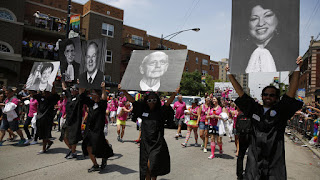 The dissenters in this case insist that the only standards for determining constitutional rights come from "history and tradition," and therefore there can be no constitutional right for same-sex marriages, because "history and tradition" restrict marriage to opposite-sex couples.  But Kennedy argues that in exercising "reasoned judgment" about how choices about marriage express "our common humanity," "history and tradition guide and discipline this inquiry but do not set its outer boundaries" (10-11, 13).  Once we understand that sexual orientation is part of our "immutable nature," and that homosexuals have the same natural desires for marital love and parental care of children that heterosexuals do, then we can see that same-sex marriage is rooted in human nature (4).

According to Thomas Aquinas, marriage is natural insofar as it satisfies two natural ends--securing the parental care of children and securing the conjugal bonding of male and female in the household (Summa Theologica, II-II, q. 57, a. 3; suppl., q. 41, a. 1).  Kennedy agrees with this, although he sees same-sex marriages as securing the same two natural ends (5, 13-16).

Aquinas accepts the biblical teaching (in Paul's Letter to the Romans, 1-2) that homosexuality is "contrary to nature" (I-II, q. 94, a. 3; II-II, qq. 153-54).  By contrast, Kennedy believes that homosexual inclinations express the "immutable nature" of homosexuals. Aquinas concedes that in their sexual desires, human beings differ in their "temperamental nature," in that a few human beings will naturally choose to be celibate, such as those (like Aquinas himself) who choose to take religious vows of celibacy (I-II, q. 46, a. 5; q. 51, a. 1; q. 63, a. 1).  But he never concedes that homosexuality might also express "temperamental nature."  So here is the one fundamental point of disagreement between Aquinas and Kennedy.

Despite this disagreement over whether homosexuality is natural or unnatural, moral or immoral, Aquinas and Kennedy are close to agreeing that the religious condemnation of homosexuality should not be coercively enforced by law.  While Aquinas regards homosexuality as a vice, he also insists that it is not the proper role of human law to enforce perfect virtue, because human law should be concerned primarily with prohibiting conduct that is harmful to social order, such as murder and theft (I-II, q. 96, a. 2).  Similarly, Kennedy argues that same-sex marriages pose no risk of harm, and that those who say that legalizing same-sex marriage will destroy opposite-sex marriage are mistaken (26-27).

So there is here--implicit in Kennedy's opinion--a natural law argument for gay marriage, in that gay marriages with adopted children can approximate heterosexual marriages in serving the two natural functions of marriage--conjugal bonding and parental care of children--without harming the institution of heterosexual marriage.
Posted by Larry Arnhart at Sunday, June 28, 2015