In the Garden: A Darwinian Love Story 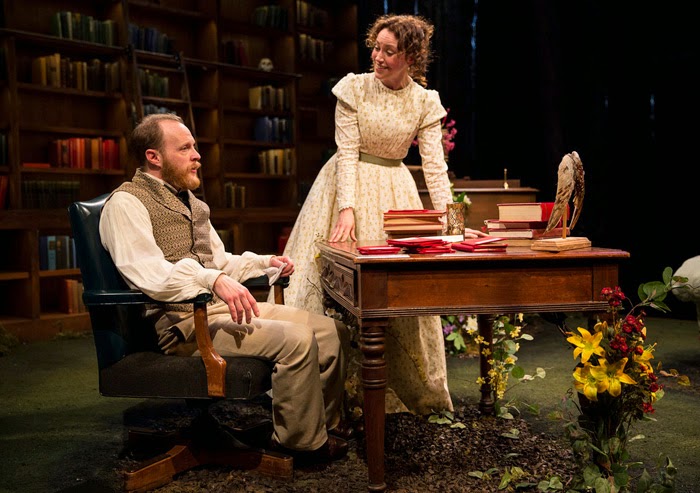 I have just seen a new play presented by the Lookingglass Theatre Company of Chicago--"In the Garden: A Darwinian Love Story."  It's a wonderfully thoughtful story of the marriage of Charles and Emma Darwin, written by Sara Gmitter and directed by Jessica Thebus.  All of the acting is superb, and especially the performances of Rebecca Stone (as Emma) and Andy White (as Charles)

There is a good study guide for the play.

The story presents the Darwins' marriage as a life-long conversation over the apparent tension between Charles' science and Emma's faith.  Ever since the publication of Darwin's Origin of Species in 1859, the whole world has been engaged in this conversation.  Does Darwinian evolutionary science deny religious faith--particularly the Biblical beliefs in God as Creator and in the immortal destiny of the human soul in the afterlife?  Or can Darwinian science and Biblical faith be compatible?  If human beings are just highly evolved animals, does that render human life meaningless?  Do the human experiences of love, death, and the longing for eternal life point to a spiritual reality of the human soul that transcends natural science?  Or can natural science account for those human experiences in a manner that is not degrading?  We see Charles and Emma struggling with these great human questions as a personal drama within their loving marriage.

As the play indicates, one of the most troubling periods of their marriage came during the illness and death of their child Annie, who died at age 10 in 1851.  Why did Annie die?  Charles cannot give a scientific explanation.  But neither can Emma give a religious explanation.  Annie probably died of tuberculosis, but at the time there was no understanding of what causes this disease.

In 1877, a friend sent Darwin an article by Dr. Robert Koch, who would later discover the bacillus that causes tuberculosis. The article contained the first photographs of bacteria, along with Koch's argument that such microorganisms could cause diseases. Darwin replied: "I well remember saying to myself between twenty and thirty years ago [about the time of Annie's death], that if ever the origin of any infectious disease could be proved, it would be the greatest triumph to Science; and now I rejoice to have seen the triumph."

So now Darwin's science can explain why his daughter died. She died because she lost her struggle for life in the war of nature with tubercular bacteria.  Would this have satisfied Emma?

What I found most instructive about the play is how Emma emerges as a strong intellectual partner for Charles.  Although she recognizes the superiority of his mind, she engages him vigorously but lovingly as she challenges him to think about the implications of his science.  Moreover, by the end of the play, they seemed to have reached common ground.  In the second edition of the Origin, Darwin inserted the phrase "by the Creator" into the last sentence of the book: "There is grandeur in this view of life, which its several powers, having been originally breathed by the Creator into a few forms or into one: and that, whilst this planet has gone cycling on according to the fixed law of gravity, from so simple a beginning endless forms most beautiful and most wonderful have been, and are being evolved."  Charles tells Emma that he wants "by the Creator" to suggest "space" for scientists and believers to find agreement on the possibility of a supernatural uncaused cause of everything.

As I have indicated in some previous posts, Darwin was careful in distinguishing the "secondary causes" in nature from the "primary causes," and thus he employed a conception of dual causality that had emerged in the Christian and Muslim Middle Ages to reconcile scientific naturalism and religious supernaturalism.

These are deep philosophical and religious issues, and it's rare to see them taken up effectively in a theatrical drama.  "In the Garden" succeeds in doing this.  And I can think of two other stage productions in Chicago in recent years that have done this--"A History of Everything" and "Freud's Last Session"--which have been the subject of some posts here and here.

In his review of the play for the Chicago Reader, Jack Helbig claims that the issues raised in the play are not really very interesting today:  "the great philosophical question at its center—whether or not one can reasonably believe in both God and evolution—is not particularly compelling, except perhaps among the fundamentalist fringe. It may have been otherwise in Darwin's time, but most believers now don't insist on the biblical account's literal truth (whatever that might consist in). Darwin himself changed that, along with Freud, and Kierkegaard, and a host of others."

Is this really true?  At one point in the play, Emma and Charles argue about whether he's right that human beings are "just animals," shaped by the same natural evolutionary processes that shape all animals.  Is it true that only "the fundamentalist fringe" are disturbed by this claim?  Can't we see in the continuing debate over sociobiology and evolutionary psychology that many people today are deeply troubled by the Darwinian understanding of human beings as animals?  Don't we see here a kind of secular creationism in the thought that human beings must have some special worth that comes from being separated from and above the rest of the animal world?

Helbig also complains that "In the Garden" is not a well-crafted drama.  Similarly, Chris Jones, the Chicago Tribune critic, describes Gmitter's play as "a smart, carefully structured but rhetorically overstuffed 2 1/2-hour play badly in need of a good edit--the dramaturgical application, you might say, of the survival of the fittest scenes."

I agree that Gmitter could make her play dramatically tighter by cutting a few scenes and rearranging them to follow their actual sequence in the life of Charles and Emma.  She could organize the play around three points--their courtship and marriage, the death of Annie, and the publication of the Origin.  Gmitter moves the death of Annie in 1851 to just after the publication of Origin in 1859, which adds nothing to the dramatic quality of the story.  She also has Charles and Emma attending the famous debate at Oxford University between T. H. Huxley and Samuel Wilberforce, although neither Charles nor Emma was actually there.  Moreover, this scene at Oxford is the weakest scene in the play, and it could be cut out, which would shorten the play by 20 minutes or so.

Making a few changes like this would make a good play even better.  In fact, this could become one of the greatest dramatic presentations of Darwinism and its human implications.

Thanks for seeing In the Garden!

(Emma is played by Rebecca Spence, and Charles is played by Andy White. Austin Tichenor plays Charles's father and brother, Wilberforce, and Parslow. Hope this helps.)

Thank you. I've made the correction.