Hobbes's Pictures of Leviathan and Liberty 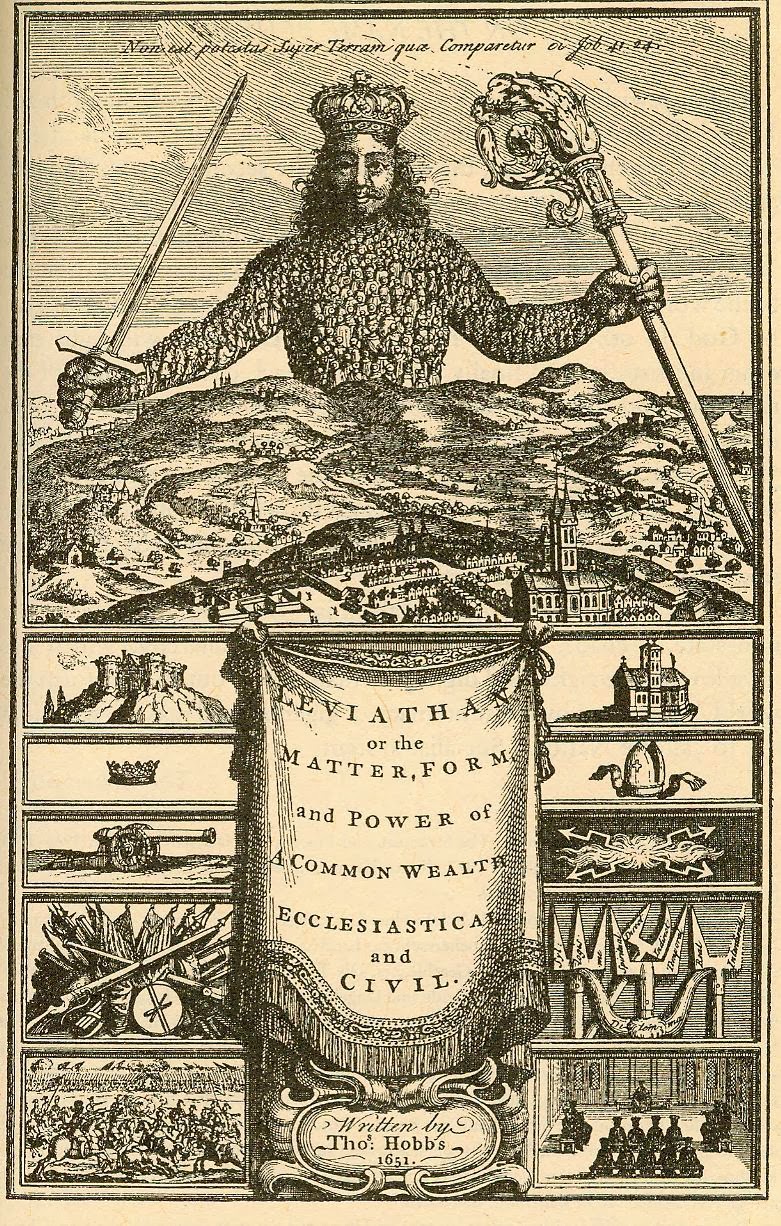 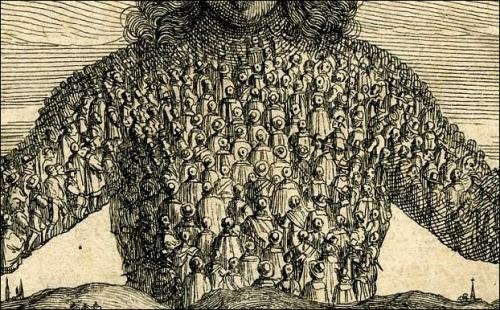 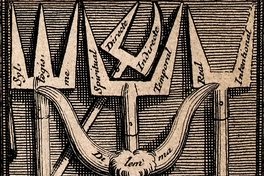 This is the most famous picture in the history of political philosophy, which is the title page for Thomas Hobbes' Leviathan, or The Matter, Forme, and Power  of a Commonwealth Ecclesiasticall and Civill (1651).

As indicated by the Biblical quotation at the very top of the picture--from Job 41:33--Hobbes compares sovereign political power to the Leviathan (probably a giant whale) who is said by God to be so powerful that no power on earth can be compared with him, and he rules as "King of all the children of pride."

In the top half of the picture, Leviathan is depicted as a king holding a staff of authority in his left hand and a sword in his right.  The king's body is composed of the human bodies of his subjects, who have their backs turned to the reader as they stare upward at the king's face.  Below the king is a settled countryside and a walled city with various buildings, including a church on the king's left side and a fortress on his right.

In the bottom half of the picture, we see the title of the book, and corresponding to the title's indication of a "Commonwealth Ecclesiaticall and Civill," we see a panel of pictures under the king's left arm depicting ecclesiastical authority, and a panel of pictures under his right arm depicting military power and warfare.  The ecclesiastical pictures show, at the bottom, a theological dispute.  Above that, we see a pair of horns named "Dilemma," a trident named "Syllogism," and three two-pronged forks with the prongs named "Spiritual"/"Temporal," "Direct"/"Indirect," and "Real"/"Intentional."  Above that, we see a picture of thunderbolts, perhaps reflecting the phrase of the time concerning "the thunderbolt of excommunication."  (Noel Malcolm has suggested this in his magisterial edition of Leviathan.)  Above that, we see a bishop's mitre.  Finally, we see a church.  The military pictures are arranged to correspond with each of the ecclesiastical pictures--a military battle, trophies of war, a cannon, a commander's crown, and a fortress. 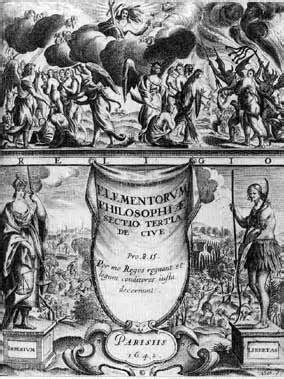 This is the title page of Hobbes's De Cive (The Citizen) (1642).  It depicts the three parts of the book.  Libertas (Liberty) is represented by a savage with a bow and spear.  Imperium (Dominion) is represented by a crowned woman with a sword and the scales of justice.  Religio (Religion) is represented by the Last Judgment of Jesus Christ.  On the side of Liberty, we see savages at war with bows and arrows, suggesting a war of all against all, although we also see some signs of social cooperation.  On the side of Dominion, we see peaceful harvesting of a crop, suggesting an agricultural way of life, in contrast to the foraging way of life in the state of nature.

These pictures convey visually Hobbes's teaching that a state of nature without government must become a state of war, in which human life must be "solitary, poor, nasty, brutish, and short."  Therefore, to escape such a condition, any government is better than no government.  And a highly centralized government with absolutely sovereign power is best of all.

Some people have claimed that the recent history of weak or failed states (like Somalia, for example) confirms Hobbes's teaching.  But is that really true?  Or does some of this history suggest that having no government can be better than having a predatory government?

I will take up these questions in my next post.

A few of my posts on Hobbes can be found here, here, here, and here.
Posted by Larry Arnhart at Sunday, January 19, 2014

Did you see that (just retired) law professor Ann Althouse just linked to this?