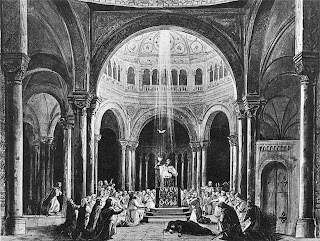 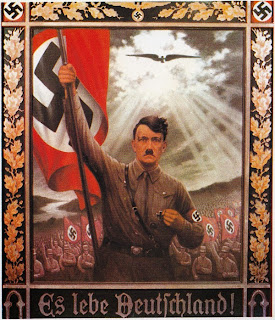 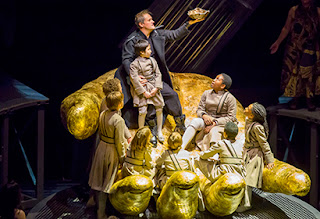 At the end of this opera, Parsifal has become the prophesied savior--the innocent fool who has been "made wise through compassion"--who restores the ceremony of the Holy Grail.  As the Grail knights declare "redemption to the redeemer," the Grail begins to glow and a white dove descends.

Nietzsche was disgusted by Parsifal because it showed that Wagner had become a Christian, and thus he had betrayed his earlier promise to use his art to form a new German culture free from Christian values.  And yet Nietzsche was ambivalent about this, because he also wanted to create a new religion that would satisfy his own religious longings for redemption.

"In the art of seduction," Nietzsche confessed, "Parsifal will always retain its rank--as the stroke of genius in seduction.--I admire this work; I wish I had written it myself; failing that, I understand it."  In its religious language and imagery, and in its quest for religious redemption, Nietzsche's Thus Spoke Zarathustra is his alternative to Parsifal.  In his later writings, Nietzsche presents himself as the disciple of Dionysus and of a new Dionysian religion that will satisfy his religious longing for some eternal meaning to life.

It was only in Human, All Too Human, in the middle period of his career, that Nietzsche was free from the Wagnerian seduction of musical art appealing to religious longings for redemption.  As shaped by his devotion to Darwinian science in Human, All Too Human, Nietzsche suggested that the religious need for redemption might be an artificial need created by thousands of years of Platonic and Biblical culture, a need that might now be disappearing through the influence of modern liberalism and modern science.

In Human, All Too Human, Nietzsche warned that the delusional expectation of redemptive leadership could make people receptive to tyrants.  And that's what happened with the rise of Hitler.  1933 was the fiftieth anniversary of Wagner's death and the year that Hitler came to power.  In that same year, Alfred Lorenz's book on Parsifal was published; and in his preface, Lorenz declared that Parsifal was Wagner's prophecy of Hitler:  "Wagner conveyed his prophetic thoughts about leadership of the Fuhrer and redemption in his work and bequeathed thereby an exalted mission."  Lorenz explained that the end of Parsifal shows "not a reactionary reestablishment of the old, but a unity of the people, helmet-clad and confident in their future, with a religiously anchored merciful kingship at the radiant peak."

Indeed, beginning in the early 1920s, Cosima Wagner and others in the Bayreuth Circle of Wagnerites had looked to Hitler as the Parsifal-like redeemer of Germany.  Hitler was reported to have said: "From Parsifal I build my religion, a sacred service in ceremonial form without theological trappings.  With a brotherly foundation of genuine love without any theatrical show of humility and empty formalistic babbling.  Without those disgusting gowns and effeminate attire.  Only in heroic dress can one serve God."

Not all the Nazis agreed with this, however.  In The Myth of the 20th Century (1930), Alfred Rosenberg generally praised Wagner as a mythmaker for the Nazis, but he criticized Parsifal because of its teaching about the primacy of compassion.  He complained that "Parsifal represents a church-influenced enfeeblement in favor of the value of renunciation."

Now it is precisely this theme of universal human compassion that is emphasized in many of today's productions of Parsifal, which move the opera away from its Christian teaching about the need for religious redemption and towards a liberal democratic teaching about the need for humanitarian sympathy.  This is evident in Lyric Opera's production, which ends with the entire cast of men, women, and children coming together in and around a giant golden hand, apparently as an expression of universal care for one another.

John Caird, the Director of Lyric's production, has said that for him the opera's message is that "one human being's compassion for another is in the end all we have."  He has also said that he and the costume and set designer (Johan Engels) decided "let's not do crucifixes," because that would exclude half of the audience.  As a consequence, the distinctly religious theme of redemption fades away, and we are left with a purely human morality of  mutual sympathy and tolerance.  This moves us towards the teaching of Nietzsche's Human, All Too Human and Wagner's Die Meistersinger.

My posts on Lyric Opera's production of Die Meistersinger last spring can be found here and here.
Posted by Larry Arnhart at Friday, November 15, 2013

Casting black people in "Parsifal" is just Cultural Marxism gone wild. It's insulting; it's a war against art.

I have to agree with the previous commentary (I assure it's not mine). It's pure far-leftism. Cultural Communism, indeed.

It's funny how we, europeans and europoids, try to reach to and to understand every human experience but, on the other hand, we assume that we have to renounce to every specific aspect of our civilization in order to "pander" or "not offend" the Sacred Other.

Memo to the ethnomasochists: every intelligent and cultivated person on the planet is going to attend "Parsifal". That person is not going to get ofended or alienated because of the Christian character of the opus. If someones gets offended is a complete moron.