A Complete Adult Hominid Skull from the Early Pleistocene 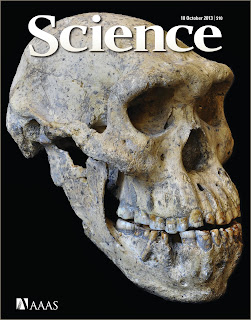 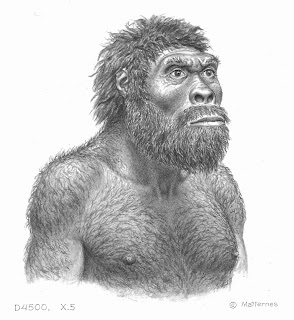 The current issue of Science (October 18) has articles reporting the discovery in the republic of Georgia of the first complete adult hominid skull from the early Pleistocene.  Images of the skull can be seen in a slideshow.  John Noble Wilford has a good article on this in the New York Times. 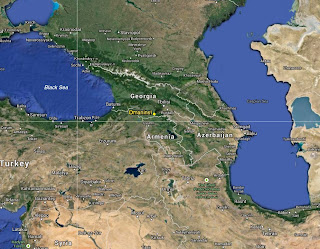 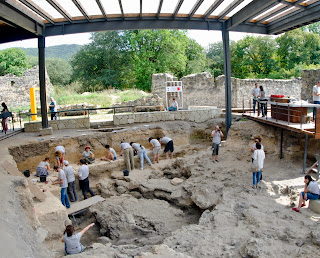 Dated at about 1.8 million years ago, this is one of five skulls found at the Dmanisi site in Georgia.  All five individuals lived at about the same time.  "Skull 5" is the best preserved skull, and it probably belonged to an elderly male with worn front teeth.  He had a small brain of 546 cubic centimeters, compared with an average 1350 cubic centimeters for modern humans.  The other skulls probably belonged to two mature males, a young female, and an adolescent of unknown sex.

What is most fascinating about these five skulls is that they are as variable as African fossils that have been classified in three different species--H. erectus, H. habilis, and H. rudolfensis.  David Lordkipanidze and his coauthors argue that the five skulls from Dmanisi belong to one species--H. erectus--and that the early Homo fossils in African also belong to one lineage of human ancestors.  If this is true, this would radically alter the common view of human evolution.

What does this tell us about the evidence for human evolution in the Pleistocene?  First, it shows us how limited the human fossil record is, because here we see that there is only one fully preserved adult hominid skull from the early Pleistocene.

But, second, this also shows that evidence--although limited--really does matter, and that the evidence can be used to falsify hypotheses about human evolution.  For example, there is a well-preserved early Homo maxilla (upper jaw) A.L. 666-1 from Hadar, Ethiopia, dated at about 2.33 million years ago, which seems to be the best evidence for early Homo before 1.90 million years ago.  Recently, however, Robyn Pickering and others have questioned the status of A.L. 666-1, and they have proposed Australopithecus sediba fossils from the site of Malapa in South Africa dated at 1.977 million years ago as the best evidence for the earliest ancestor of the Homo lineage.  Now, Lordkipanidze and his coauthors argue that the similarities between A.L. 666-1 and skull 5 from Dmanisi effectively falsify this claim for A. sediba.

Undoubtedly, this new evidence will not resolve the continuing controversy among evolutionary scientists about the precise path of human ancestry in the Pleistocene.  But still this controversy will be constrained by the available fossil evidence and by any new evidence that might turn up in the future.

In 1996, Pope John Paul II said that the Catholic Church could fully accept the truth of Darwinian evolution, but with one qualification--the creation of the human soul required an "ontological leap" that could only come from a miraculous intervention by God.  Is there any fossil evidence for this?  Why should we assume that God was unable or unwilling to allow a natural evolutionary process to create the human soul?

Darwin allowed for such theistic evolution by speaking of natural evolution through "secondary causes."

Greg Cochran notes that this drive by leftists to deny species is really based on political correctness and not science:

I don't see anything in Cochran's post about "this drive by leftists to deny species."

What I do see in Cochran's post is that he misses the whole point of the Lordkipanidze et al. article. Cochran says that for most of human existence, "most people never even met anyone from another race or subspecies." In fact, Lordipanidze et al. show that the five skulls at Dmanisi were from individuals living at roughly the same time and place. Thus, they show variation within the same hominid species.