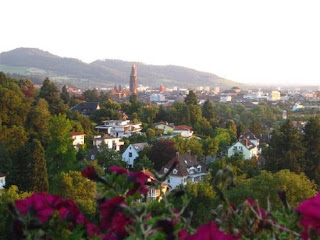 
As I indicated in my posts in July, my Darwinian World Tour began in the Galapagos Islands and at the Mont Pelerin Society conference on evolution and liberalism.  The tour continues this fall.

On September 13, I will be at Notre Dame University for the political theory workshop, where we will talk about my MPS/Galapagos paper on "The Evolution of Darwinian Liberalism."

On October 4-5, I will be at the Philadelphia Society meeting in Atlanta on "The Permanent Things," celebrating the 50th anniversary of the publication of Russell Kirk's The Conservative Mind.  I will be on a panel with Peter Lawler and others on "Human Nature and the Permanent Things."  My leading idea will be: "Human nature is not a permanent thing.  But it is an enduring thing.  That's enough."  The most pertinent piece of writing for this would be my article "Darwinian Conservatism Versus Metaphysical Conservatism" in the Fall 2010 issue of The Intercollegiate Review.

On October 10, I will be in Houston at Lone Star College.  I will be in a discussion with faculty members of Darwinian Conservatism.  Then I will lecture to an audience of students on "Does Darwinism Support or Subvert Morality?"

On December 12-15, I will be in Freiburg, Germany, for a conference on "Liberalism and the Evolutionary Agenda," sponsored by the Walter Eucken Institut, Freiburg, and the Max Planck Institute of Economics, Jena.  The distinguished roster of speakers includes Paul Rubin, Michael Ruse, Robert Richards, Ken Binmore, Jean Gayon, and Ulrich Witt.  My lecture will be based on a revised version of my Galapagos paper.

On March 13-16, I will be in Tucson, directing a Liberty Fund colloquium on "Liberty and Violence: From Auberon Herbert to Steven Pinker."
Posted by Larry Arnhart at Monday, August 12, 2013