John Locke and the "Appeal to Heaven" Flag 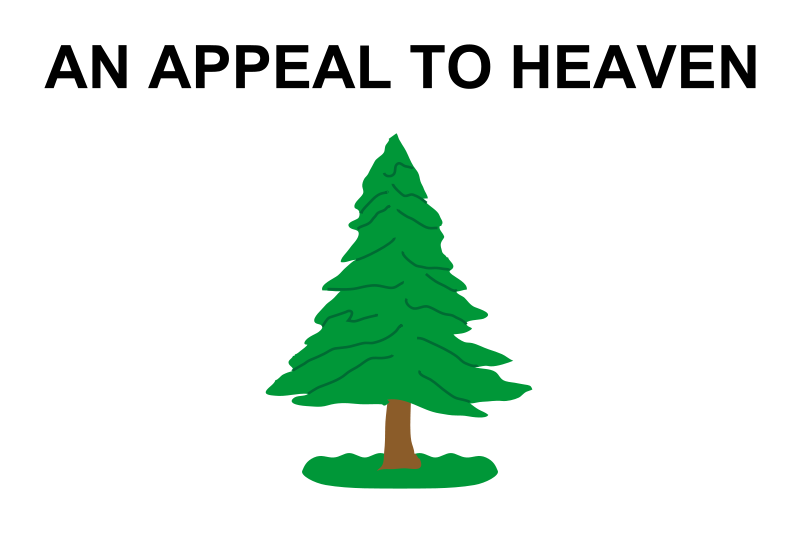 As I have suggested in some previous posts, John Locke's "appeal to Heaven" shows a natural inclination to violent resistance to exploitation that is fundamental for classical liberalism.  As a manifestation of Darwinian natural right, this can be explained as rooted in an evolved animal disposition to aggressive retaliation against attacks, which arises in human beings as a natural propensity to vengeance against injustice.  Human beings can use their unique capacities for language and conceptual reasoning to express this natural propensity through abstract principles of justice, but these abstract principles are ultimately rooted in this evolved animal tendency to self-protection.

Locke's "appeal to Heaven" is his answer to what he takes to be an ultimate question of politics--"Who shall be judge?"  This is the question when there is an irresolvable debate over whether political power has been rightly used or not.  Locke's answer comes from the Biblical story of Jeptha (in Judges, chapter 11).  In the conflict between the people of Israel and the Ammonites, Jeptha is selected by the people to be their chief and war leader.  He negotiates with the Ammonites.  But when this negotiation fails to reach an agreement, Jephtha declares, "Let Yahweh the Judge give judgment today."  That divine judgment will come through war.  That's what Locke means by the "appeal to Heaven" when there is no "appeal on Earth."  (See First Treatise, sec. 163;  and Second Treatise, secs. 21, 109, 155, 168, 176, 232, 240-43.)

As far as I can tell this phrase "appeal to Heaven" is Locke's.  It doesn't appear in the Bible.

It's similar to the way Confucius speaks of the "mandate of Heaven," as I have indicated in a previous post on "Confucian Liberalism."   If there is any heavenly standard of judgment to settle moral and political disputes, it's ultimately expressed in the natural tendency of the people to rebel against unbearable oppression.

This is what I mean in my previous post affirming the truth of might makes right:  the threat or use of violent vengeance is the ultimate natural restraint on injustice.

Notice also how Locke interprets the Bible--at least the Old Testament--as a work of historical anthropology.  He assumes that what is being described in the history of the judges is the earliest emergence of government in primitive societies, where the natural drive for dominance in a few individuals motivates them to become war leaders chosen by their people.  Notice also how Locke interprets this as showing government by the consent of the governed, in that these informal leaders like Jephtha depend on popular support for their authority.  Thus the Biblical history coincides with what Locke sees in the history of the American Indians as a record of how government arose among the earliest human ancestors.

The influence of this Lockean idea in the American Revolution was vividly displayed in the design of what apparently was the first flag of the American navy in 1775--perhaps commissioned by General Washington--which had an evergreen tree of liberty and the motto "Appeal to Heaven."  Some of the variations of this design can be found here and here.
Posted by Larry Arnhart at Sunday, December 09, 2012